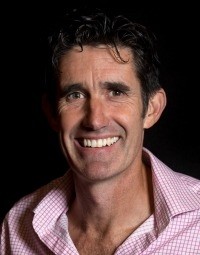 From car bombings to meeting Yasser Arafat and making it to the summit of Mount Everest, Mark ‘Squiz’ Squirrell OAM has experienced more than many can dream about. When he headed to the East Timor Crisis in 1999 he was setting out on the adventure of a lifetime. It was a journey that would see him navigate some of the globes most brutal war zones to deliver emergency aid and conquer the world’s tallest mountain.

Squiz was awarded the coveted “Green Beret” whilst serving with the Australian Commando’s.  His tenure with the military provided him with the skills and courage to succeed amongst adversity and turmoil. It was the perfect grounding for a career as an International Aid Worker.

Squiz escorted food convoys through the Gaza Strip, negotiated with the Liberation Tigers of Tamel Eelam (Tamil Tigers) and brokered deals with Somali Clansmen to ensure the safe delivery of United Nations food aid.  In doing so, he has mastered the challenges of performing under pressure, communicating effectively and building relationships.

Squiz uses anecdotes and presents real time scenarios that demand lateral thinking to deliver relevant and practical tips for those working in today’s complex and fluid global market. The real time conundrums are presented via authentic video, Virtual Reality goggles and photos that have the audience embroiled in the critical decision making that led to his eventual success.

In addition to this, Squiz has taken the concept of being motivated at work to an all new high.  He was inspired by his organisation, the United Nations World Food Programme (WFP), and the impoverished people that it feeds, to climb to the top of the world to help raise awareness of the global hunger crisis. After a gruelling six week ordeal, Squiz raised the WFP flag on the summit of Mount Everest. The inspiring and thrilling recount across glaciers and up exposed cliffs reveal the motivation, habits and adversity skills that facilitated his success.

Squiz has a Bachelor of Business (HRM) and has published a memoire titled From Arafat to Everest. In 2019 Squiz was recognised in the Australia Day Honours List with an Order of Australia Medal (OAM) for “service to the international community through humanitarian aid”. He continues to deploy on short term assignments to emergency zones, such as the Ebola Outbreak in West Africa and 2015 Nepal Earthquake.