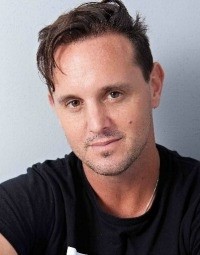 At age seven he began with traditional platform diving and within a few years he embarked upon an intensive training regime with Olympic aspirations. In his later teens, Joey took a step left ?eld and left the diving boards behind in favour of cli? tops and bridges.

Hitting the international Cliff Diving competition scene with a graceful quad somersault, Joey was hooked on the adrenalin, the fear, and the unparalleled thrill of the competitive sport. With intensive and methodical training he was at the top of the game, and soon won the Red Bull Cliff Diving Championships in Hawaii, which is considered the spiritual homeland of cliff diving.

It was during a Cliff Diving exhibition in a remote region of Colombia that every diver’s greatest fear became a reality for Joey. Overcoming the ritual fear he took the leap with full knowledge of the shallow water depth. The dive was beautiful and the entry was textbook, but what occurred under the water was not. He felt sand on the outside of his leg and realised that he had hit the bottom…too hard, too fast. He hadn’t reacted within time and his injuries were horrific.

Only when the shock started to wear off did Joey begin to comprehend the disaster that had befallen him. With his femur (thigh bone) at an unimaginably unrealistic angle, he barely managed to swim to the rescue boat and his crestfallen friend. The pair attempted to scramble a helicopter to the remote region, but it was impossible to arrange, due to the risk of anti-aircraft from the cocaine guerrillas. With no painkillers, Joey endured a nine-hour one-road van trek to the nearest hospital.

Eight hours of surgery in Bogota was filled with terrifying complications, and Joey’s recovery was riddled with life-threatening setbacks including acute kidney failure. Six further surgeries on his leg, and ultimately a complete recovery testify to Joey’s strength of mind, sense of humour and determination to return to Colombia to thank his medical staff, and to dive from the same bridge where the accident took place.

It’s a unique and emotional story of sheer determination, grit and stamina, combined with Joey’s invaluable messages of facing fear, overcoming adversity, perseverance and methodical preparation. Joey is currently the only cliff diver in the world on the motivational speaking circuit, and his emotive talks deliver compelling accounts of his adventures with clear take-home messages for the audience.

Joey's story has been transformed into a documentary called Dive Into Fear, and he is the official TV host for the Red Bull Cliff Diving World Series, which is broadcasted internationally. He also acts as a cliff diving consultant for feature films such as The Mechanic Resurrection featuring Jason Statham.