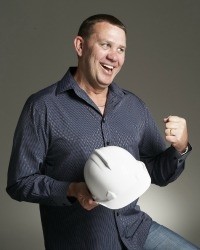 No doubt you will know about the famous Apollo 13 rescue mission that was turned into a major Hollywood film by acclaimed director Ron Howard. The film depicted the real life events of the incredible rescue mission devised by NASA’s mission control to save the lives of the three astronauts.

Australia had it’s own Apollo 13.  On the 25th April 2006 Australia and the rest of the World were stunned to hear about a major mine collapse in Beaconsfield Tasmania.  At 5.45pm on the 30th April, rescue workers discovered that Todd Russell and Brant Webb were still alive. What followed was an incredible coordination effort by dozens of rescue workers who were now focused on getting the miners out.

Sitting at home watching this unfold was explosive expert Darren Flanagan. That Sunday night Darren received a phone call that would change his life for ever. So began one of the most amazing rescue attempts in history.

That one phone call changed Darren’s life from being an ordinary family man into one of the real heroes of the “Great Escape”. His story is emotive, dramatic and extraordinary. It’s one of endurance and the triumph of the human spirit. As a result of the rescue, Todd and Brant nicknamed Darren “The Gun”.

In this emotional and truly memorable session, Darren will share his story and in doing so, demonstrate the capacity of ordinary people to show unrelenting spirit and perform under extreme pressure when faced with a set of extraordinary circumstances. Darren’s presentations are always passionate and thrilling however Darren includes a mix of humour as well to ensure audiences are taken on a roller coaster ride.

What audiences will take away from Darren’s presentations:

Darren Flanagan a nice bloke and the true hero of the Beaconsfield mine disaster. I was so swept up with Darren's story I wept in front of my team, mind you so did most of the team - and when I retold Darren's amazing true story to my wife I cried again. What an absolutely amazing and absorbing experience, both for the presenter and his audience. The effect of Darren's presentation on my leadership group will reverberate endlessly.

From our delegate feedback forms I have never seen such a response to one speaker in all the years of organising the Local Government Accountants Association Conference. It was amazing how many focused on Darren's presentation as the best presentation at the conference. Mind you, with other Great Expectation speakers and some of the powerful presentations from local government industry speakers, to get so much feedback on Darren's segment was simply amazing.