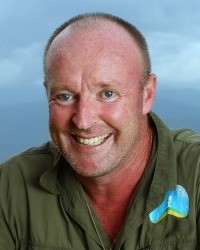 Aidan Grimes is an accomplished coach and, through his unique understanding of history, has helped many change their perception of the past, equip them to live in the present, empowering them to design the future they wish to have.

He has a keen interest in what makes the best get better. Clients who work with Aidan are those that want to constantly improve, get the best from their people and expand the range of possibilities.  His passionate, engaging and energetic focus empowers the people he works with to become the type of leaders they want to be, creating sustainable leadership for teams and organisations.

Aidan has completed his 124th Kokoda Trek in November 2019, and remains the only Kokoda operator to have a 100% success rate. Aidan inspires participants as they encounter the mental and physical challenges on the treks.

Through historical benchmarks, extreme corporate events and personal development initiatives, he promotes a way of thinking that removes limitations and unearths a basic instinct inspired by the passion and spirit he believes is inherent in all Australians.

He has a life long passion for developing success factors with particular interest in team culture, sports psychology, wellbeing and extreme events. Aidan is a tertiary qualified sports scientist majoring in coaching psychology, with postgraduate studies in nutrition and is currently completing a Phd.

He has over 30 years of corporate wellbeing and team building experience as well as successfully coaching sports at various international and state levels.  He has developed many Leadership initiatives and his “rite of passage experience” (ROPE) course has now been implemented into many organisations.

He has worked with many large corporations including Microsoft, Computer Associates, Ericsson, Intel, Apple, Nine MSN and Vodafone and educational institutions including Monash and Federation Universities. He has also worked extensively with Youth at risk, both here in Australia with the NSW Police, NT Police, NSW and NT Police Legacy, and overseas with various reputable agencies including the British SAS and ADF.  He is, or has, worked with the following sports organisations - the Brisbane Broncos, Hawthorn Football Club, Geelong, AIS Olympic Kayak team, QLD Cycling.

Aidan is also a man of integrity with a strong belief that his actions will always speak louder than words.  Over the past 20 years, Aidan’s contribution to various charities exceeds $3.5 million dollars. Aidan has achieved and celebrated a range of personal accolades.  In 2000 Aidan was named ‘NSW Community Father of the Year’, while developing and managing the Vodafone Extreme Corporate Challenge, which raised over $1 million dollars for the “Life's a Ball” youth suicide prevention program. He has also been recognized with the RSL National Anzac Award 2012 with the following citation: “exceptional service to the Australian Community demonstrating compassion, endurance and dedication to the Kokoda campaign and other community services”.

Aidan's organisation, Our Spirit, continues to develop, introduce and support medical, educational and sporting initiatives that continue to foster relationships with many remote communities around the world.

He continues to donate his “spare” time to further the cause of youth development offering his services as a highly sought after public speaker to schools in Queensland and interstate continually delivering messages of wisdom to support individuals reach their true potential.

A passionate philanthropist and war historian with an unsurpassed reputation for his encyclopaedic knowledge of Kokoda and other battle sites, Aidan has been recognised publicly by Stan Bisset 2/14th Battalion, Keith Norrish 2/16th Battalion, Greg Ivey, PIB Battalion in support of this.

The local Papuan’s have honoured Aidan with the nickname “Uda Baroma” - meaning wild boar as a sign of respect for the incredible strength and leadership he has demonstrated over the past 22 years crossing the Kokoda Track and other military significant tracks.

Aidan has spent 24 years studying primitive tribal culture in PNG and has unearthed the secrets to these tribes survival through the development of their culture. It is this culture that determines the successful lifespan of the tribe. Aidan, uses this vast understanding, along with sports science and military understanding to be able to offer high performance initiatives.

Most recently, Aidan was voted in (by the majority of Kokoda trek operators) as the Chairman of the Kokoda Ethics Committee with the purpose of setting transparent and accountable standards and practices so that the “sacred” Legacy of Kokoda can be protected for all generations, with a direct report to the Federal Government.  In 2015 Aidan was also the founder of the Kokoda Operators Association.

He is also an honorary member of the 2/14th, 2/16th , 2/33rd, Australian Commando Association and PIB Battalion Associations respectively, acknowledgement that underpins his deepest respect for the Australian Military whom provide us with the freedom and independence we enjoy as a nation today.

His numerous (and incredibly inspiring) keynotes explore concepts including:

I just wanted to thank you for allowing 1 CSSB the opportunity to host Aidan Grime's visit this week. It was very valuable and all members participated enthusiastically. Aidan was inspirational, informative and was able to draw every member into the discussions to the extent that work place issues and concerns were discussed in non-threatening and fun ways. It is hoped that this will have a positive impact on workplace relationships in the future, particular for the members concerned. Members were able to reflect on themselves and how their actions and attitudes might inhibit or enhance workplace cohesiveness, as well as improve individual general health and wellbeing. This was most beneficial when related to workplace morale. While I would have preferred to have more members in the afternoon sessions, I believe that every member has benefited from the training. I am hoping that 1 CSSB can continue the excellent relationship with the SRC next year and Aidan will be able to return in the future. Thanks once again. Aidan, you are most welcome to visit 1 CSSB at any time!n