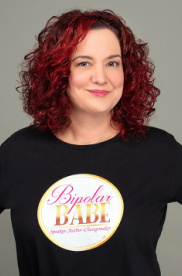 The Charity is now named the Stigma-Free Society and offers programs across British Columbia under the Stigma-Free Zone branding. The Charity's service delivery mainly includes educational mental health and anti- stigma programs for both youth and adults. The Society offers virtual presentations to schools and the community on the topic of stigma with a focus on mental wellness. Andrea's purpose is to create awareness and understanding of various stigmas, while encouraging people to be accepting of themselves and others.

Andrea is passionate about educating the community about the stigma surrounding mental health and additional societal stigmas that negatively affect people’s perceptions of themselves and others. She shares her personal story of struggle and triumph since her bipolar disorder diagnosis in 2005 throughout multiple venues across the globe.

She is an award-winning mental health activist, educator, facilitator, speaker, and published author. In ten years, Andrea has presented her story at over 500+ schools, workplaces, community organizations and events, reaching thousands of people with her hopeful message.

Andrea is the 2019 award winner for the President's Commendation from the Psychiatric Association of Canada. She has been named as a 2017 YWCA Woman of Distinction nominee for Metro Vancouver. She has been featured on a Bell Let’s Talk Public Service Announcement that aired nationally across numerous media outlets. She also has been featured on a CBC documentary in the Fall of 2020.

Andrea is the 2015 Courage To Come Back Award recipient in the category of Mental Health from Coast Mental Health, 2013 Mel Cooper Citizen of the Year in Victoria, B.C. and the Winner of the 2013 Award for Youth Mentorship from the National Council for Behavioral Health, Washington, D.C. Andrea is also recognized as the winner for Vancouver Island's Business and Community Award - 2015 Top 20 Under 40 Award. In 2016, she had been named as an official spokesperson for the Bell Let's Talk Faces of Mental Illness Campaign for the Canadian Alliance on Mental Illness and Mental Health (CAMIMH).

Andrea shares her message with passion far and wide that truly, "No matter what our challenges, we can all live extraordinary lives."