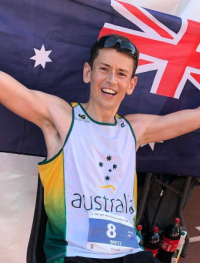 Dr Kay (pronounced 'Kai', rhyming with sky) Bretz is a German-Australian corporate leader, elite athlete, entrepreneur and author of the inspirational book 'Turning Right – Inspire the Magic'. After earning a master's degree in International Business and getting awarded a doctorate in European Law in record time, Kay has worked in more than a dozen countries as a McKinsey consultant. When he reached the level of an Associate Principal, he moved to Australia and joined the Buying leadership team at Coles Supermarkets in 2011, followed by the Woolworths Group from 2017 to 2020.

During his time as a corporate leader, he pursued his passion for long-distance running and learned to master the mental game. Kay stepped up from hobby marathon running to becoming one of the fastest ultramarathon runners worldwide. In his first year of ultrarunning in 2015, he improved the race record of the 250-kilometre-long Big Red Run by more than five hours. Then he joined the Australian national team in the 24-hour running format and became the fastest-ever Australian at the world championships, clocking 259.67 kilometres within 24 hours. In 2019 he got awarded the Australian Ultraperformance of the Year Award.

The pivotal moment unravelling his personal transformation was a simple right turn at his garden gate. Accidently, one day Kay turned right and realised that he had never turned right at that juncture. Too much was he caught up in his need for predictability, clinging to discipline and self-control. Turning right made him realise that there was a world out there waiting for him to explore, so – metaphorically speaking – Kay started turning right more often embracing uncertainty. Over this journey he learned how to leave behind the limitations he placed on himself which prevented him from overcoming his biggest challenges and reaching his dreams. His entire perspective on what he was capable of shifted, resulting not only in performance jump but also deeper fulfillment.

Since 2020, Kay dedicates himself to help leaders and organisations thrive. Through keynote speaking, executive coaching and facilitating business transformational, he inspires others to unleash their inner magic by 'turning right' themselves. Kay works with people who desire more from their existence and have the courage to lead a life where they shine brightly. He is most curious, what magic is waiting to emerge from within you and your team?

We found your story unique, inspiring, and transformative. You challenged us to get out of our bubble and rethink current contests and how an alteration to our mindset (Turning Right) can deliver profound professional and personal growth. Your presentation and activities sparked effective discussion between our team which built stronger relationships, new perspectives and alignment towards a new annual vision."

Big thank you for sharing your story with our leaders. Such an inspiring individual who, at first, I thought was an athlete but surprised me that he has so much more than that. ‘Turning right’ is a completely different mind frame and thought-provoking way of thinking and excited to use this moving forward in our business. Turning Right sticks so quickly that it has fast become part of our leadership language. It gives me great confidence that a full change of our behaviours is just around the corner.

Kay, thank you for contributing to our National Commercial Conference. As the featured keynote outsider speaker you brought some well needed dynamism and excitement to proceedings and got the whole team thinking in a completely different way. Thanks for your energy, both challenging us as well as providing practical tips how to shift individuals and organisations to another transformative state. We can highly recommend 'Turning Right' for anyone who wants to acquire a mindset where anything is possible.