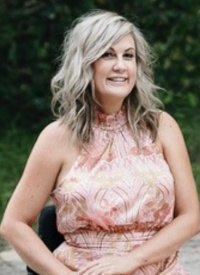 Karni Liddell is a former world record holder, Paralympic swimmer, speaker, TV presenter, “Mama” and clinical social worker. Karni was born with a neuro-muscular wasting disease and her parents were told that their first-born child wouldn’t walk, crawl or live past her teenage years.

Karni broke her first World Record at the age of 14 and she went on to win Paralympic medals at every Paralympics she competed at, and she regards being captain of the Number 1 team at the Sydney 2000 Games her greatest sporting achievement.

Karni has risen over $1million dollars throughout her career for the various disability charities she supports.

Karni is currently the QLD Manager for the Public Service Commission whereby her role is to increase employment of People with a disability across the Public sector and the community to 8%. Karni was the National Disability Insurance Scheme (NDIS) Ambassador and officially opened the NDIA head office in Geelong, she is a member of the Qld Premier’s Domestic and Family Violence Council and is a Domestic and Family Violence specialist and trainer (Karni delivers the Lifeline DV-alert Working with Women with Disabilities and the Griffith University Mate Bystander workshop).

She is a presenter for Channel 7 ‘The Weekender’ and was a talkback radio presenter. She is the Ambassador for Kids Help Line, Muscular Dystrophy QLD and Sporting Wheelies and Disabled Association. Karni was the Patron of the International Day of People with a Disability and was awarded the Pride of Australia medal. Karni was just awarded the Bond University Alumni Community Achievement Award (2021); she has also won the Qld Teacher and Trainer of the year (2015) and was awarded the Alumni of the Year award for the faculty of health at the Queensland University of Technology (QUT). Karni holds a Clinical Masters in Social Work (QUT) and a double Bachelor’s degree in Communications from Bond University.

Karni is an Internationally acclaimed and sought after keynote speaker and has just done a TED speech, which has been watched by thousands of people around the world and was the only TED speaker on the day to receive a standing ovation.

I found Karni to be a very well spoken, inspirational and articulated young woman. Her will power, strength and life defining moments she kindly informed us off were truly inspirational and motivational. Her courage, competitiveness and drive, I felt was partly instilled by her parents at an early age as they were great role models, plus their implementation of a continuous exercise program from the age of 3 has been phenomenal is Karni achieving such remarkable goals. Karni made us all realise that "Achieving things in life people say can't be done is one of the greatest pleasures in life and never say never!" What a fantastic luncheon and enlightening motivational presentation and slide show.

The best speaker I have experienced was a sentiment echoed by high profile business executives and politicians at our event. Karni Liddell's message to our business community at the 2010 Capricorn Tourism & Economic Development and Ergon Energy Business Excellence Awards proved inspirational to our audience on corporate, personal and family levels. Our Gala Dinner guests experiencing laughter, through to a humbling quiet - as Karni's emotions in her address about overcoming odds - and being inspired by others less fortunate - was heartfelt and down to earth! It certainly created a reflective time for many people about their own perceived hardships! Karni's natural speaking capability is highly recommended and was certainly a highlight of our awards evening.

We have received a lot of positive feedback about the day and we appreciate that much of that related to the entertaining and though provoking speech you made on the day. Few successful athletes have the ability to put into words the challenges and efforts in such a powerful way whilst continuing to recognise the input and support of others as you did. Your message will stay with us for a long time.