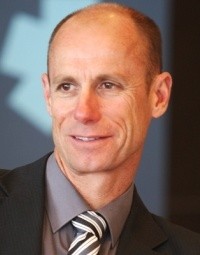 Steve Moneghetti exemplifies what is to be achieved through training, perseverance, planning, goals and aspirations.

From Australian Under 20 Cross Country Champion in 1982, Steve has become a world champion distance and marathon runner. He has been awarded as No. 1 World Road racer, Australian Sports Star of the Year and Commonwealth Games Gold Medallist. Steve competes and wins in Marathon and Distance events from Berlin to Tokyo each year.

He has run 22 international marathons and finished in 11th place or higher in 20 of them. He retired after Sydney 2000 Olympic Games but still heavily involved in running within Australia.

He trained twice a day, covering 180 – 200 per week and roughly 8500km a year under the guidance of dual Olympian and Sydney 2000 Athletics Head Coach Chris Wardlaw. He's still running every day covering over 100km a week. He recently won the Oceania Masters Athletics 50+ Cross Country title and in 2009 ran a world age record for a forty six year old of 29.59mins for 10km on the road making me the oldest person to run under the 30 minute barrier.

Steve was appointed Chef de Mission for the 2010 and 2014 Australian Commonwealth Games Teams and awarded an AM for significant service to athletics as a marathon runner, administrator and mentor to young athletes in 2014 Queen’s Birthday Honours List.

He is currently an Australian Sports Commission Board Member and Life Member of Athletics Victoria & Ballarat YCW.

Steve speaks extensively within Australia to community and corporate groups. Often described as the highlight of the function, Steve’s positive easy style holds and inspires audiences of all types. Steve speaks on what it takes to be at the top and how to apply the same basic principles to succeed in life at all levels.