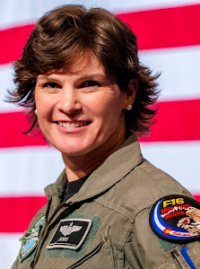 Tracy "JackieO" LaTourrette, Colorado’s “First Lady” fighter pilot and one of the first women in the world to fly fighter aircraft, has flown missions globally as a combat mission-ready F-16 fighter pilot.

Tracy graduated along with 88% men from the US Air Force Academy with a coveted appointment from President George H.W. Bush. She entered less than a decade after the first women commissioned--and graduated before women were even authorized to fly combat aircraft.

Lieutenant Colonel LaTourrette retired after 22 years while serving as the Deputy Director of Operations at the Colorado National Guard’s Joint Force Headquarters. She has a Bachelor of Science in Human Factors Engineering, and over 3,300 combined flying hours as a pilot and AWACS Air Weapons Director. She earned countless medals and ribbons to include multiple Aerial Achievement Medals, Expert Marksman, Combat Readiness, and Top Gun / Turkey Shoot Champion.

Post 9-11 “JackieO” flew direct Presidential protection missions and flew in a classified location for Operation Iraqi Freedom. High stakes, high pressure and rapid adaptability are the norm in her world.

Tracy is a highly sought-after international speaker and executive consultant for Fortune 100 companies, associations and more. She has made television appearances on Discovery Channel, Travel Channel, and Science Channel as a fighter pilot expert panelist, and has spoken at Harvard Business School. She customizes her speeches to any makeup and size audience, authentically connecting with her attendees on a personal level. Her executive consulting and interactive workshops are second to none.

Tracy's attitude of personal accountability, generous leadership and habits of excellence make her a no-nonsense, no-excuses speaker of choice for any group, in person or virtually. Tracy loves to interact with her attendees face to face, is great to work with, and always makes time for a story, an autograph or picture. Customized client care is standard-your mission, your people, to hit your target.

Partner with Tracy, known for breaking barriers, from the sound barrier to beyond.   Fight’s ON!