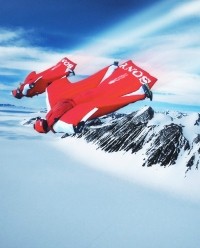 Dr. Glenn Singleman and Heather Swan are an Australian husband and wife team, who have set multiple World and Australian records in extreme sport. This includes one for the highest BASEjump and for the highest Wingsuit BASEjump, both set from a 6672 metre Himalayan mountain and the first (and only) wingsuit traverse of the Grand Canyon from rim to rim. In December 2017 they made the first wingsuit flights in Antarctic, across Mt Rossman in the Ellsworth Mountain Range.

For more than 20 years, Glenn and Heather have combined their passion for adventure, their broad skill sets and their dedication to each other to be successful not just in these demanding, cutting edge projects but also their day-to-day happy, healthy lives.

Glenn is well known to Australian and International audiences both as a speaker and documentary film-maker. He is also a practicing medical doctor.  He has travelled the remote corners of the world to make many successful films for National Geographic International including four projects with Hollywood Director James Cameron (Terminator, Titanic, Avatar), and BASEClimb, which continues to win awards as one of the best adventure documentaries of all time.

Heather is the only woman in the world to successfully combine high altitude mountaineering and BASEjumping, let alone wingsuit BASEjumping. She is also a successful writer and photographer, a former senior corporate executive and a sort after professional presenter.

Glenn and Heather are Australia’s best-known wingsuit pilots with over 1000 wingsuit flights each. They have featured twice on Australian Story, three times on 60 Minutes and in a number of international documentaries including ‘The Search for Freedom’ in 2015. They are the recipients of many awards including the prestigious ‘Spirit of Adventure Award’ for excellence from the Australian Geographic Society.

In December 2011 Glenn and Heather made the first and only wingsuit flight across Sydney Harbour landing next to the Sydney Harbour Bridge. This highly technical flight took three years to organise. It was executed perfectly and on the same day as the jump it featured on every Australian national news program and many current affairs programs thereafter.

In 2012 Glenn was a key member of the Deep Sea Challenge Expedition, which culminated in the deepest solo submersible dive in history by team leader, James Cameron. In 2014 he was medical director on an Antarctic Expedition to the Bay of Whales that set the record for the furthest point South ever reached by sailing vessel.

In 2015 Glenn and Heather made the first (and only) Wingsuit flight across the Grand Canyon. The flight featured on 60 Minutes and in Australian Geographic. In 2016 they flew across Kati Thunda (Lake Eyre) and Wilpena Pound in outback South Australia.

In December 2017 they made the first wingsuit flights in Antarctic, flying across Mt Rossman in the Ellsworth Mountain Range. In January 2018 they made the first wingsuit flight across Melbourne city – completing their project to fly Australia’s Eastern capital cities. These projects are as much about persistence, project planning and management as they are excellence in execution.