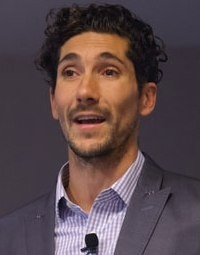 Gus is the former Executive Director and Chief Technology Officer at Lonely Planet. This combined with his background in investing, advising and founding new start-ups has enabled Gus to equally engage with people from the mailroom to the boardroom, from embryonic start-ups to large public corporations.

With his ever curious and experimental style, he worked with some amazing people and companies to help Lonely Planet tackle the digital revolution and muscle through a decade of disruption by developing products and technology platforms that contributed to the revolution in travel and media.

He has now hung up the boots of corporate life and is ready to share his experiences with others. Energetic, enthusiastic, passionate, engaging, practical, frank, big-thinker - words used by those who have worked with or have listened to him present. Gus talks of business disruption and transformation, plus the successes and failures of a media industry that continuously goes through significant reinvention. The lessons he shares can be applied to every industry, business and individual facing the challenges of the 21st century.

Gus's story
Born and bred in the Argentinean Patagonia, Gus dreamt of travelling the world from the age of eight when he first told his family that rather than studying, he was just going to travel.

By the time he was 17, after baking hundreds of cakes in what became a very successful small cake enterprise, he won a scholarship which landed him in Byron Bay. The year-long trip to Australia would ultimately change his life.

Not only did he meet his future wife and now mother of their three beautiful kids, Gus came to believe that travelling is a state of mind before anything else.

With this belief, a small backpack and dreams of great adventures, he crisscrossed South America racking up 40,000 kilometres without spending a cent. During that time, he spent countless hours talking to travellers and dreaming about helping travel guide companies make better products: 'this content is so old, I can help them fix it' he suggested to anyone who would listen.

Eventually, he returned to Australia picking macadamia nuts, running a tennis school and starting an import export company, but a small ad in a newspaper offering work at a travel company was too good to ignore. Armed with the quintessential Aussie 'give-it-a-go' spirit and encouragement from his family, he applied. The odds were against him and on the back of his enthusiasm and travel experience he managed to secure a designer role at none other than Lonely Planet. As far as Gus was concerned, he had landed the job of his life.

Fast forward to 2014; after eight roles within Lonely Planet, having competed an MBA and spent hundreds of hours on planes, Gus had progressed to leading Lonely Planet with a team as passionate about the businesses place in traveller's lives as he was. Gus ultimately rose to be Chief Technology Officer and one of three executive directors of Lonely Planet before hanging up the boots and calling it a day.

He had done what he set out to do. The team he had led had launched e-books, apps, implemented new company wide software, reset directions in China and India and restructured the business to put it back in the black. With this team of extraordinary people Gus re-invented the speed of content production, reengineered the product creation process and pioneered a new mindset of collaboration in what was and still remains an amazing travel brand.

Gus has worked closely with some of the biggest companies in the world developing cutting edge technology and products including Google X, Nokia, Apple, Amazon and more. He will blow you away with energy and insights into the transformation, struggles and successes of one of the most loved brands in the world.

Intelligent, Interesting, Inspirational. A great partner to our process that has help broaden our thinking and engage people in debating the opportunities contained in diverse opinions. We will definitely work with Gus again and use him to help sharpen our view of our own potential and refine the possibilities of the market place.

Gus was fantastic!!! Highly engaging and lots of energy. We had many comments on the day about how interesting and engaging he was and also how his presentation was so aligned with our strategy and how much his messages resonated throughout the team. The examples and real life experiences he told really brought to life his key messages.