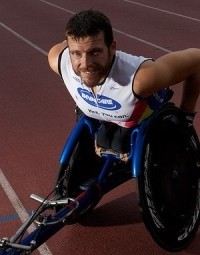 Kurt is recognised as one of Australia’s leading keynote speakers and presenters. He has presented to small and large groups around Australia and internationally, sharing tales of his sporting and life accomplishments with strong themes of building resilience, the importance of a strong team and leading through example.

Raised in the small country town of Carcoar, Kurt Fearnley has always been determined. Being born without the lower portion of his spine has never held him back, from backyard games of football to crewing a winning Sydney to Hobart yacht, crawling the Kokoda Track and winning dozens of marathons around the world.

Turning his attention to wheelchair sports in his teens, Kurt quickly became a world beater. He started his career with two Silver medals at the 2000 Sydney Paralympic games, before making his winning breakthrough at the 2004 Athens Paralympics with Gold in the 5000m and marathon races. Following the 2004 games, Kurt conquered the world, winning seven world championships and more than 30 marathons around the globe, including 10 marathons in 2007 and three straight New York marathon titles. He solidified his standing as a marathon great by defending his Gold medal at the Beijing Paralympics, before winning Bronze at the London games in 2012 and finishing his Paralympic career with Silver in the marathon at the 2016 Rio games. Kurt finished his Australian representative as he started it, on home soil, with a win in the marathon at the 2018 Gold Coast Commonwealth Games.

In 2009 Kurt spent two week’s in Papua New Guinea crawling the 96 kilometre Kokoda Track raising awareness and funding for men’s health charity Movember and beyond blue. In 2012 he was an active member of the Sydney to Hobart Yacht Race winning crew aboard Investec Loyal.

Kurt is a passionate disability advocate and devotes himself to a number of national and Hunter-based charitable initiatives. He is a board member of the Australian Paralympic Committee, Newcastle Permanent Charitable Foundation and member of the International Paralympic Committee’s Athlete Advisory Council. Kurt is a former board member of Australian Volunteers International and NSW Australia Day Council and was a founding member of the National Disability Insurance Scheme’s Advisory Council. His involvement at the 2018 Gold Coast Commonwealth Games wasn’t limited to competing, having been a member of the formal bid team, Games Technical Committee and an official ambassador. Kurt’s exploits both in and out of sport over many years have seen him recognised with a number of honours including 2019 NSW Australian of the Year, 2009 NSW Young Australian of the Year and 2018 The Don winner as the Australian sports person most likely to inspire the nation. In 2018 Kurt was recognised as an Officer of the Australian Order, and received an Honourary Doctorate from Griffith University for his contribution to sport and disability advocacy.