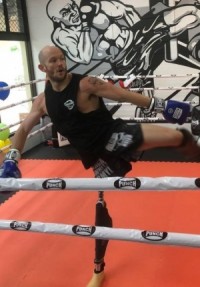 Glenn Dickson was just 25 when he lost his leg, having been attacked by a shark while on a fishing trip with mates. He came within 60 seconds of bleeding to death, but with a will to survive, to spend time with his wife and kids and see his third child born, he came back from the brink.

As Glenn was lifted from the rescue helicopter to Cairns base hospital, he yelled "I will survive". Arriving at the hospital, he told his fiancé and future wife, "I love you" and gave her one last kiss, before undertaking emergency surgery, which resulted in his upper right femur limb being amputated. Now a motivational speaker, Glenn Dickson tells his story, and leaves audiences with strong messages about how they can survive and thrive as well.

Glenn Dickson is a father, a former Muay Thai fighter, a personal trainer and a boilermaker. In February 2017, he decided to head out fishing with his mates off Hinchinbrook Island in North Queensland. It was on that trip that he was attacked by a shark. Fortunately for Glenn, his quick-thinking friends saved his life, dragging him from the water, applying a tourniquet, contacting emergency services and getting him to shore.

Queensland Ambulance Service senior operations supervisor Neil Noble told media, "Had that bleeding not been controlled with direct pressure and a tourniquet applied, and blood being given to him by the helicopter rescue crew, I'd give him another 60 seconds and it's quite possible this gentleman would've died from his injuries."

After multiple surgeries Glenn entered into a long battle of recovery and rehabilitation. Through sheer determination, he overcame the major hurdles his life had thrown at him, learning to walk again with incredible optimism and positivity.

Following his recovery, Glenn and his wife opened a family business and he pursued his dream to become a gym trainer, despite working as an amputee and being unsure of the amount of pressure his prosthetic limb would handle.

Glenn speaks on the topic ‘I will survive'. This honest, thought provoking and vulnerable talk takes the audience on the journey from a day that started fishing with mates and ended in hospital. With a unique sense of humour and charisma, he tells his audience how mateship, bravery and first aid skills saved his life. And he explains how, as a personal trainer and Muay Thai Fighter, he continues to maintain the strength to retain his independence, support his family and ultimately survive.

Audiences are left with key messages about overcoming adversity, developing mental strength, believing in yourself no matter what others think, being opened minded and maintaining a positive energy.