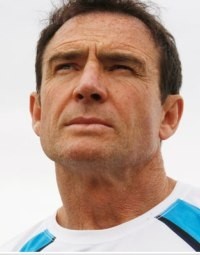 Pat Farmer has transformed his interest of ultra-marathon running into a professional career - setting and breaking world records at events globally, while simultaneously raising funds for charities and medical research programs. Pat is dedicated to helping humanity and has raised millions of dollars for causes during his 20-year running career including Lifeline, Cancer Council, and Diabetes Australia.

He was awarded The Australian Geographic Adventurer of the year for his efforts. A high profile leader, acknowledged for an enviable media following, positive “brand” awareness, and the influence to unite and inspire action for a vision or solution.

Pat is a multiple world record holder for endurance running. He has run around Australia and across North America twice and in February 2012 completed a Pole to Pole run to raise $100 million for clean water programs for Red Cross International. Nine plus months of running The Greatest Run in History - an incredible trek from the North to the South Pole - 14 countries, over 21,000km, two marathons per day, no days off, for almost a year!

Pat released his book this year Pole to Pole – One Man, 20 Million Steps, chronicling his journey.

Raised brand awareness for sport and sponsors, gaining a reputation for entertaining addresses, with his trademark combination of enthusiasm, drive and commitment. His open communicative leadership style creates a team vision of growth, harmony and a culture of success. Winner of “Achiever of the Year” (2000), awarded by then Prime Minister, John Howard.