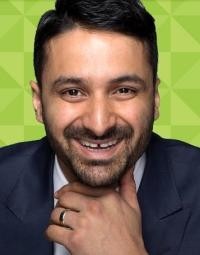 Pronounced dead for over three minutes following a horrific car crash, Sam Cawthorn survived despite all the odds stacked against him. The accident resulted in his right arm being amputated and caused permanent damage to his right leg. He was told he would never walk again; a setback that would surely defeat many.

Proving the doctors and critics wrong, through sheer determination Sam regained his ability to walk just over a year later. Since his accident, Sam has gone on to speak in 36 countries, sharing his message of resilience with millions of people which has seen him share the stage with world leaders including President Bill Clinton, Michael Jordan, Richard Branson and the Dalai Lama, through his keynote speaking.

An international best-selling author, Sam was named Young Australian of the Year, Edupreneur of the Year (2015) and became the CEO and Founder of Speakers Institute and Speakers Tribe, mentoring a community of speakers and leaders who are learning to share powerful stories to emotionally connect and influence others.

Sam has authored many books including an International New York Times Best Seller. It was the notion that ‘story is the future’ that led Sam to write his seventh and latest book Storyshowing. Published by Wiley and released in October 2017, Storyshowing delves deep into the influence of stories; and that the winners of the future will be those that show the most powerful one that evokes the most amount of emotion in the shortest amount of time. A regular media commentator, researcher and thought leader, Sam Cawthorn is one of the biggest personalities in professional speaking in Australia. His presentations and keynotes need to be experienced.

Sam is amazing! He took the night and on the back of it our conference, to a whole new level. We ask our people to rate every aspect of our conference from 1-10, this is the first time I have ever seen ratings of 15, 20, 25 etc. And it was all because of Sam's presentation.

You are the most extraordinary person that I've ever met. Your courage and will to overcome adversity is commendable. I truly feel privileged to have witnessed such an amazing talent. You are changing the world one person at a time. You've changed us.

Inspiring and entertaining the room was transfixed by Sam's message of optimism in both business and in life.

Sam is a very engaging speaker and his message of 'bouncing forward' resonated with our team. He's a living example of how important it is to stay positive, to be resilient and to keep pushing forward no matter what challenges come.