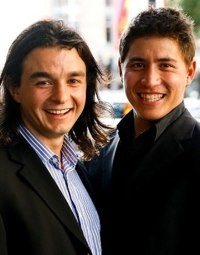 On the 26th January 2012, they made history by completing the longest unsupported polar expedition of all time. In 100 years of polar exploration no-one had EVER walked from the edge of Antarctica to the South Pole and back without assistance. Many had tried, none had succeeded. After 89 gruelling days they made it back to the coast after having skied 2275km with everything they needed to survive in the harshest environment on Earth.

Four years earlier they Crossed the Ditch – paddling 3318km without assistance across the Tasman Sea for another world first. They braved 10 metre swells, howling winds, endured severe food and sleep deprivation and adverse winds and currents. They became the first kayakers to cross the Tasman Sea as well as becoming the longest transoceanic double kayak expedition. Staggering upon the shores of New Zealand, the adventurers were sunburnt, bearded, underweight, and physically and mentally wasted…but most of all happy to be alive.

Over the past 5 years they have created two highly engaging presentations. Using stunning footage and imagery from their expeditions, they have melded key corporate themes (including: goal setting, risk management, planning, teamwork, overcoming adversity & leadership) into two unforgettable presentations. Their keynotes are the perfect tool to:
- Motivate your staff
- Open or close your next conference
- Entertain your guests and delegates
- Provide an inspirational after dinner presentation.

The boys are highly regarded as two of Australia’s premier public speakers and have written & produced four award winning books and documentaries about their expeditions.