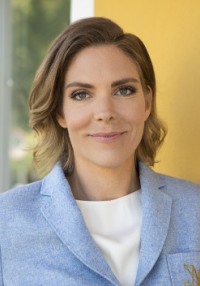 She was the first woman at the position as Chief of the European Liasion Office to CISMi, as well as the first woman admitted to the military national shooting team. She is trained at the US Army Marksmanship Unit, Fort Benning, and has been recognized with the Supreme Commander’s coin not less than two times.

Christina is an experienced leader, multilingual and has an innate understanding of cultures and behaviours. Together with a number of successful Swedish top executives, Christina has studied the crucial nature of being able to focus and found that their capacity to be "perfect even on an imperfect day” was due to this vital ability.

Besides psychology- and military studies, she also has a Management Diploma from the Stockholm School of Economics and is the author of the acclaimed book “The art of focus – 10,9”.

Christina was latest employed within the Department of Security, Strategy and Leadership at the National Defence University in Stockholm. She is a part of the faculty of Stockholm School of Economics International Executive Program and is an absolute top expert on focus.

Her concept aims to help professionals and the public to filter both internal and external distractions in order to stay sharp and fully present. The initiative was born out of an increasing need from both the business sector and individuals to handle increasing workloads, stress levels and new distractions brought by the rapid digitalization.

Born and raised on the Swedish countryside, she started her shooting career at the age of 23, with the aim to become world champion. It took years of repetitive training, not getting any reward or recognition, but 7 years later the goal was achieved.

Christina gives tangible advice, based on 25,000 hours of training, on how to identify and let go of distracting thoughts and how to stay sharp, and shares her captivating story of literary going from zero to hero by using the power of focus. The ability of focus is vital, not only in specific critical moments, but in life in general and to get things done in all kind of organizations. It´s connected to essential abilities such as listen, learn, emphasize and to steer oneself or one´s group in the right direction.

In a world where we are always online, in the loop and up to date, Christina shows that the winners will be the ones that can master the tools and practice the art of focus, and thereby identifying life´s and people´s truly great values.

Christina´s track record as speaker and adviser includes Swedish Business Sweden, the Swedish Parliament, major companies in Sweden and abroad such as Volvo, Atlas Copco, Ericsson and Hugo Boss and Business Schools worldwide. Lately she has made international breakthrough as author and speaker, and her TED-talk has more than 0.8 million views.