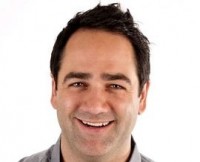 You can hear Michael (Wippa) each weekday alongside Fitzy on Nova’s Sydney Breakfast show, and nationally from 6pm to 7pm.

In radio Wippa has found a platform to try and live out everything he’s ever dreamed of, including making it in to the Guinness Book of Records through engineering the world’s biggest catapult (The Bob-Katterpult), which launched a Volkswagen the greatest distance; and, finally chatting to his idol, Russell Crowe.

A closet rock star, Wippa has also shared his lyrics and music through serenades which can be heard online at the Nova website, where he woos his listeners and guests including JLo, Paula Abdul, Taylor Swift and Ricky Martin to name a few. His desire to be a model was also realised with re-enactments of famous cover-shots, including John and Yoko for Rolling Stone, Megan Gale in her pregnant state for Marie Claire, and of course his Sunday Style Magazine fashion debut along with Fitzy.

Wippa’s journey began with the completion of a building management qualification from TAFE that gave him the introduction to life on a building site, where he got to play with the big boys and wear a pair of Blundstones. These days he much prefers loafers. Being part of a freelance crew, working project to project, gave him the freedom to test out the entertainment industry.

On completing a radio short course Michael put together a demo which he sent around Australia before gaining work in sunny Port Augusta.

With the opportunity of casual work at Fox FM he returned to Melbourne, and become a regular on the Hamish and Andy Saturday morning show, and working as a project manager for a building company during the week. Running amuck on the Hamish and Andy show, one of the high lights included flying to L.A to interview Paris Hilton.

Putting a demo together Michael then auditioned for a position at 92.9 in Perth, which he secured. Michael co- hosted the breakfast show, Em, Wippa & Ollie for two years, and in 2009 Wippa returned to his home town of Melbourne to take a seat beside Ryan and Monty on Nova’s national drive show.

In 2011 he moved to Sydney to team up with Ryan ‘Fitzy’ Fitzgerald and take on the extended drive slot of 4pm-7pm. The duo then moved to Breakfast and became the darlings of driving people to work each morning.