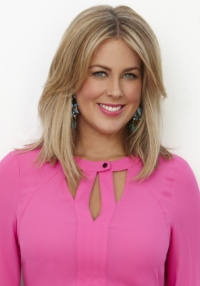 She’s hung from a helicopter over crocodile-riddled billabongs in the Top End, powered a jet-ski through shark-infested waters off the South Australia coast, ridden camels and driven road trains. There's not much Samantha Armytage hasn't done.

Sam is the co-host of Sunrise, Australia's favourite breakfast show and during her 22 years as a journalist has covered major stories including the Christchurch Mosque Massacre, the 2015 Paris terror attacks, the Queensland floods, the Cronulla riot, ‘Black Saturday’ bushfires and the New Zealand mine disaster, for which she and her team won the 2011 Logie for Best News Coverage. She has reported on wars in East Timor and Iraq, the 2002 Bali bombings, the Canberra bushfires and the trials of Schapelle Corby and the Bali Nine.

From royal tours to the Melbourne Cup, Sam covers them all.   Sam finished with Sunrise in March 2021, and will concentrate on her podcast and family life.

Samantha was very professional and engaged the audience well. The guests loved her.

Samantha Armytage did a fantastic job, she worked extremely well with Mark Beretta and their synergy was immediately evident. She was nothing short of pleasant. Constantly mingling with guests and nothing was too much effort.