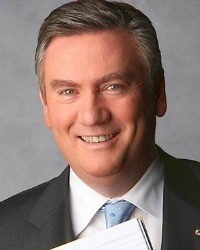 In 1982, Eddie McGuire joined Channel Ten as a sports journalist/presenter for Eyewitness News where he remained until 1993. He joined Channel Nine in February 1994 as sports commentator and co-host of the award winning program The Footy Show and in 1999 he was cast as host of Who Wants to be a Millionaire. Since then Eddie has become one of the most recognised faces in Australia.

In 2005 Eddie escalated his media career, becoming the CEO of the Nine Network only to leave that position in 2007, preferring to be a television presenter. He headlined the ratings blockbuster 1 vs 100, was guest host of The Midday Show and Today Show and hosted various televised events including Friday Night Football, The National IQ Test and the Logies. He is now the host of The Hot Seat.

In business, Eddie McGuire founded his own media production company and in the world of sport, as president of Collingwood Football Club, he has been a key leadership figure to the club's outstanding success. A passionate and devoted Collingwood football fan since his childhood, Eddie became President of the club in September 1998.

Eddie was responsible for bringing AFL coverage to FM radio and McGuire Media packaged Triple M’s top-rating football match coverage. More recently he has been amongst the action calling AFL games for Melbourne’s SEN radio station and currently hosts Triple M’s Hot Breakfast which can be heard between 6-9am weekdays in Melbourne.

Despite his hectic schedule, Eddie can still find time to help others through the Trevor Barker Foundation. The foundation honours the memory of the St Kilda star who died after a courageous battle with cancer in 1996.