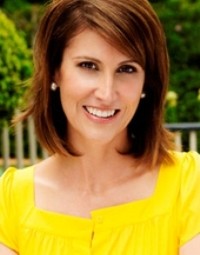 Natalie Barr is the news presenter on Australia’s favourite breakfast show, Sunrise. Nat was born and raised in the small West Australian city of Bunbury.

From regional work Natalie cracked Perth working on breakfast radio for six months and freelancing for the Nine Network. Natalie then decided experience overseas would be invaluable and she moved to the US where she worked for several years in Los Angeles at stations KABC, KTLA and KCOP.
She won a Golden Mic for Best Newscast Writing in 1994 and a Los Angeles Area Emmy Award nomination for her work on KCOP’s coverage of the OJ Simpson car chase.

Since returning home to Australia, Natalie has worked as both a reporter and presenter at Seven. In July 2008, she began presenting Seven Early News alongside Mark Beretta at 5.30am, which leads into Sunrise where she is still the news presenter. Natalie is also the regular fill in for Samantha Armytage on Sunrise.

In January 2009, Natalie presented live from Washington DC for Sunrise for the inauguration of Barack Obama as President of the United States.