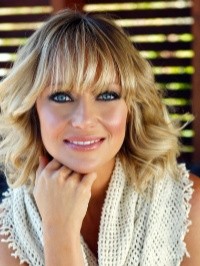 Shelley Craft is arguably one of Australia’s most popular television presenters. Starting out at Seven’s children’s program, Saturday Disney, Shelley has gone on to host some of Australia’s most successful lifestyle programs and specials including: Channel Nine’s Australia’s Funniest Home Videos, The Great Outdoors, Guinness World Records and the hit renovation series, Domestic Blitz.

Shelley is currently the co-host of ratings smashing Channel Nine series The Block. Outside of commitments for Channel Nine, Shelley has lent her credibility and trusted profile to well-known brands such as Banana Boat, Swisse, Kellogg’s, Milo, AMP, Trip a Deal, and The Natural Chip Co. Her flare for design has also seen her take on an ambassador role for Pillow Talk, Tint a Home and Carpet Court.

Shelley is a superior communicator and she is widely acknowledged as one of Australia’s most accomplished MCs and interviewers.

We have had many positive comments from the guests who attended the function.

Wow, a week out we are still receiving great comments regarding Shelley. Shelley was gracious regarding every request made of her and carried out all of her duties (and more) with a beautiful smile.