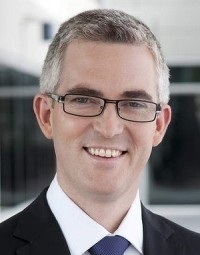 He is one of Australia's most respected political journalists and interviewers, leading the Sky News Walkley and Logie award-winning political news coverage.

He has been chosen to host Leaders’ debates and forums at the last five federal elections and covered the last four Presidential elections in the United States.

Between elections David is one of the busiest, and best-connected correspondents in Canberra.  He has interviewed numerous world leaders, including US President George W. Bush at the White House and travelled extensively reporting from China, India, Iraq, Afghanistan, Indonesia and Europe.

In 2014 David was awarded Australia’s highest journalism honour, a Walkley Award for his global headline-making “What is Metadata” interview with the Australian Attorney General. He received his second Walkley award in 2015 for his “The Fixer” interview featuring then Minister for Education and Training Christopher Pyne.  In 2016 David and the Sky News Political team were recognised with both a Walkley and TV Week Logie award for the team’s outstanding coverage of the 2016 Federal Election.

David is also the recipient of the 2016 Kennedy Award for Most Outstanding Political Reporting and the winner of more than 10 ASTRA Awards for excellence in broadcast journalism.

David served for three years as President of the Parliamentary Press Gallery from 1999 - 2003. He has also served as a Director of the National Press Club since 2005.

He previously worked as a Political Reporter for a number of radio stations in Canberra and at New South Wales Parliament in Sydney.