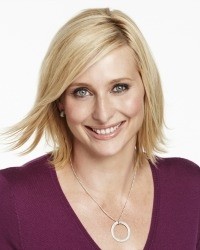 Johanna Griggs is a former swimming champion who has built a highly successful career as a television presenter. She has covered some of the biggest sporting events including the Olympic Games, World Swimming Championships, Australian Open and Davis Cup.

Johanna represented Australia at the Auckland Commonwealth Games winning a bronze medal in the 100m backstroke but her career was cut short after a lengthy battle with chronic fatigue syndrome.

She has built a solid career in media was a regular panelist on Network Ten program, Beauty and the Beast before she joined Seven Network.

At Channel Seven, Johanna Griggs is host of Australia's number one lifestyle program heading into its 13th year on air, House and Garden. Johanna has also participated in the Australian Tennis Open coverage, and was the first Australian woman to solely host an Olympics' coverage when she covered the 2002 Winter Olympics in Salt Lake City.

1994 she became Channel Seven's first female (and youngest ever) presenter of the Weekend Sports News. Johanna has also hosted of Auction Squad, Sportsworld and the 2004 Athens Olympic Games and has been a presenter on Channel Seven's coverage of The Melbourne Spring Racing Carnival for several years.

Other sport commitments include hosting the Medibank International, and the World Gymnastic Championships in Melbourne. 2006 got off to a busy start for Johanna who once again hosted the Medibank International, and Australian Open broadcasts once again, before heading over to Torino in Italy where she fronted Seven's coverage as host of the 20th Olympic Winter Games.