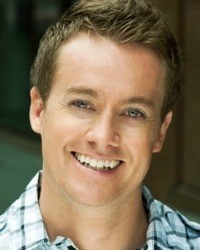 Grant first came to our screens as a fresh faced 22 year old News Reporter for Network Ten in 1999. Realising his talents quickly, the Network gave him the opportunity to work on the station's V8 Supercar coverage as a pit reporter, a dream come true for a budding V8 Supercar driver.

He moved across to the Seven Network in 2003 and has never looked back. Australian audiences really got to know Grant as Sunrise's Weather Man, taking the 'Sunrise Weather Wagon' around the country for more than two years, going from town to town, spending most of his time on the road and away from home.

He gave up the 'Sunrise Weather Wagon' in 2006, but stayed on with his "Sunrise" family to do Special Reports. With many hours of live TV experience, 2007 saw Grant in a new role with 'Sunrise' with 'Dare Denyer'. Viewers were able to set his challenges every week, which has seen him jump off the tallest building in New Zealand, to wearing a 'Mankini' down at Bathurst on live national TV.

Grant then went on to host Seven Network's  'Australia's Got Talent' for a number of years and can now be seen on the network's quiz game show Million Dollar Minute.

Whatever the challenge, Grant never backed down. But he's not just a presenter or host. Living out every male fantasy, Grant always dreamt of being a Race Car Driver.

He started driving cars at the age of seven around the family farm in the Riverina area in NSW. As a youngster he raced go-karts, he then progressed into Utes, and now real cars, driving a FORD V8 in the V8 Supercar Fujitsu series.

In 2008, Grant shattered his L1 vertebrae in a Monster Truck accident. Everything about the jump was text book, except the landing. His back absorbed more of the impact than the truck's suspension and left him in intensive care for more than two weeks. Grant's racing, presenting and hosting career was put on hold whilst he worked through his recovery period.

He returned to TV as host of Family Feud on Ch10.  In 2018 he won the Gold Logie Award for Best Personality on Australian Television, a tribute to his hardworking nature.