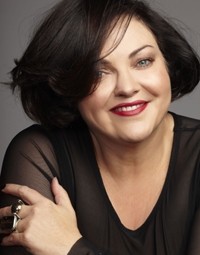 Ella James has notched up over 20 years in the Australian media, in radio, television and magazines as well as playing the supporting role in a Tropfest finalist film and performing stand up comedy at the Basement for the International Comedy Festival.

Backstage stories from behind the mike and the camera offer fascinating insight to the world of the celebrity. She has interviewed a startling range of people form Whoopi Goldberg, Jimmy Stewart, Chrissy Amphlett, Terry Biviano, Collette Dinnigan and Prime Minister John Howard, to lesser known people suffering extraordinary hardship in their lives, and those who have achieved the unimaginable.

Ella peppers her delivery with fascinating quotes and thoughts from these interviews. In addition, as one of the most popular female voices in the strange world of 'voiceover' Ella delights audiences with her mimicry and live performance of her ads.

Ella has broadcast to UN peacekeepers in Somalia and Cambodia, been a 'chopper chick' doing traffic reports for Sydney's 2UE, and travelled to Japan to record the voice tracks for a Satellite Navigation System that will be rolled out in all Ford and Jaguar cars. She spends part of her life in little boxes recording material that you hear on your phone system or on radio ads while you drive to work, and the remainder on stage entertaining.

Ella is a first class entertainer, presenter and Master of Ceremonies, a formidable host, compere and comedian. She excels in tailoring comic keynote speeches, stylishly introduces other speakers, manages timelines, creates excitement, maintains an energised pace and atmosphere, interviews guests, keynote speakers and delegates – and makes you laugh like never before.

Distinctive, professional, warm, friendly and funny, Ella will entertain, inform and motivate your audience and deliver your message with wit and intelligence.

A first class Master of Ceremonies with a thoroughly distinctive and professional style... In addition to fulfilling the brief of MC she also designed humourous and other segments involving audience participation.