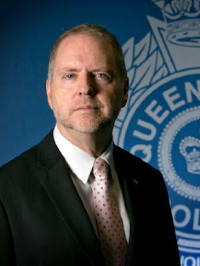 Detective Acting Superintendent Rouse has 36 years’ service with the Queensland Police Service in Australia. In 1996 Jon commenced investigating crimes against children and in 2001 he commenced at Task Force Argos where he implemented Australia’s first operation to proactively target internet child sex offenders.

He has instigated multiple national and international investigations targeting child exploitation criminal networks and has delivered training to law enforcement officers in Australia and across the world.

Jon is currently the joint Subgroup Chair of the INTERPOL Covert Internet Investigators Group and is a Director with The Society for the Policing of Cyberspace (POLCYB).

Jon is the recipient of four Commissioners Certificates for his operational leadership and two Queensland Police Excellence awards for Child Protection Prevention.

In May 2018, Jon accepted the ‘Champion for Children Award’ in New York from the International Centre for Missing and Exploited Children in recognition of his dedication for over 24 years to fighting and investigating crimes against children.