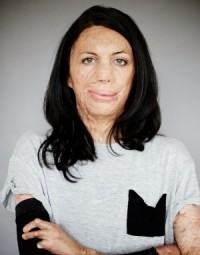 Turia Pitt is an extraordinary woman.  A past model, she has a double degree with honours in Mining and Science which led her to her dream job as a mining engineer in Kununurra with Argyle Diamond Mine.  In 2011, her life changed forever when she was trapped in a fire and she escaped with burns to 65% of her body.

In September 2011, Turia Pitt, a beautiful 25-year-old mining engineer working her dream job in the far north of Western Australia, entered an ultra-marathon race that would change her life forever. Trapped by a fire in a gorge in the remote Kimberly region, Turia and five other competitors had nowhere to run. Turia escaped with catastrophic burns to 65 per cent of her body.  With too little unburned skin left for skin grafts, Turia was put in an induced coma in the Burns Unit at Sydney's Concord Hospital while her body fought life-threatening infections and her surgeons imported skin from California. She lost the fingers on her right hand and her fingers on her left are partially fused together. She needed a new nose. There have been numerous operations, yet there are many more to come.

While the story of Turia's survival involves many people - other race competitors, her rescuers, medical professionals - at its core is the strong will of Turia herself as she continues the long rehabilitation process with the loving support of her partner, Michael Hoskin, and that of their families where the local community has rallied, raising funds to help with huge medical bills.

Her book “Everything to Live For” is the story of one young woman's survival against extraordinary odds, a testament to the human spirit.  It is also a love story. Michael, Turia's handsome teenage crush who became the love of her life, now cares for her as they plan a new life together; he is there to encourage Turia in her determination to move forward in an outwardly different body.  The real tragedy of this story is that it should never have happened - because the race should never have happened.

In 2016, Turia has competed in her first IRONMAN competition, and is releasing a new book and an online motivational program as well as walk the Kokoda trail to raise money for Interplast, a not for profit organisation that she is closely aligned to. Turia has raised close to $1 million since she began working with the organisation several years ago.

This engaging and refreshingly candid young woman will astonish you, inspire you and leave you in stitches. Her enthralling message of overcoming adversity and the need to never EVER give up will motivate you … out of your chair, and into life. The standing ovation Turia was given at her TED talk is a testament to her skills as an orator. Turia’s motto ‘never ever give up’ resonates with people from all walks of life – anyone, anywhere, who refuses to be limited by circumstance. She is a true and profound inspiration to all those she meets.

Simply AMAZING! Turia’s presence on the stage captivated our audience. Her ability to overcome the physical trauma of her experience and then battle through the mental and emotional challenges that followed is justly inspiring. Turia was able to share her brave story with connection to our audience, who were completely silent for the duration, until the end when Turia was given a 100% standing ovation. Turia is a truly remarkable human. We would recommend Turia as an inspirational or motivational speaker with absolute enthusiasm.

Turia's presentation was very well received with glowing feedback received from all attendees, all of our expectations were truly met. Turia will be highly recommended to our wider network and suppliers.Turia was inspirational, funny, moving and drove a clear message to our audience. You could hear a pin drop!