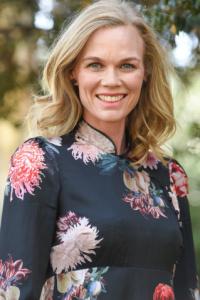 As an Australian sporting legend, Katrina Webb is no stranger to a Gold medal podium or a star-lit stage. She has received awards and medals most athletes only dream about. Despite this success, her journey hasn’t always been easy.

Born into a family of sporting stars, it was no surprise that a young Katrina Webb was born with natural athleticism. By the age of eighteen, she had already secured a netball scholarship at The Australian Institute of Sport. What she didn’t realise at this time was that her sporting career was about to take an unexpected turn.

During training at the Institute of Sport, a right sided weakness that Katrina had since birth and for many years she had spent hiding, was labelled Cerebral Palsy. Katrina’s ability to pursue netball at a national level was in jeopardy. Despite this, a twist of fate presented a previously unseen opportunity. Katrina was eligible for the Paralympic games. Her weakness had become her greatest strength.

Over the years Katrina had tried to conceal her disability, so making the decision to compete at the very public Paralympics was not easy. In time, she realized that through self-acceptance and determination she could tackle her disability head on and that it was her gift. This decision paid off when she won two Gold medals, and a Silver medal in Atlanta 1996 and at Sydney 2000 went on to win a Silver and Bronze medal.

While the Sydney Paralympics were successful for Katrina, her competitive spirit still left her with a desire to win Gold again. She knew that to do this she needed to take ‘conscious action’ and become a ‘Gold’ level performer in every aspect of her life. In the four years between the Sydney and Athens Paralympics, Katrina mastered the alchemy of performance with a clear focus on understanding mindset, and the results speak for themselves. At Athens in 2004 she won another Gold Medal in the 400-metre sprint and set a new Paralympic record.

Today, Katrina’s running career is in the past, but her passion for helping others perform at their best continues to be her greatest inspiration. Off the track Katrina is the Director of Silver 2 Gold High Performance Solutions which specialises in powering organisations, teams and individuals best. As a professional speaker she has impressed audiences at an International level including speaking at the United Nations and sharing the stage with the likes of Sir Richard Branson, Jack Ma and Usain Bolt.

Katrina is a global ambassador for the International Paralympic Committee and due to her own experience in dealing with a disability and a deep love of helping others, Katrina is the Founder and Director of Newday Leadership a platform to inspire leadership for the greater good.

Katrina loves to be challenged. She has walked the Kokoda track and has trekked to Basecamp Everest twice. She is also a mother to not just to one but to three beautiful boys and facilitated leadership programs to Nepal, raising funds for the health, education and protection of children in Nepal.

Katrina is an international speaker, leadership and personal mastery consultant, trainer in wellbeing and resilience and a physiotherapist.

Katrina delivered inspiration to all those who attended the launch of Small Business Month 2009. Not only did Katrina relate her story to the key messages that the event aimed to deliver, but also provided the audience with several positive messages that they were able to relate to and implement both professionally and personally, especially in challenging times. Katrina is a true professional who is of great value to anyone wanting to inspire and motivate an audience.

The absolute best presenter I went to. I didn’t lose interest at all. She captivated the audience. Valuable tips that I can actually complement in my personal and professional life. Wonderful. I loved it. Katrina is an amazing person. Inspirational, excellent speaker and presenter.