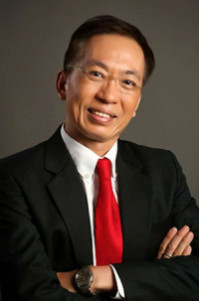 David Lim, CSP is one of Asia-Pacific’s best known motivational speakers and team skills experts. He led the landmark 1st Singapore Everest Expedition in 1998 (as well as the second in 2001). Partially disabled from a devastating rare nerve disorder after the 1998 expedition, his comeback story of overcoming the odds made the cover of the Readers Digest magazine in 2001, and has since been translated into eight languages, and reaching over 35 million readers. He worked in media for nearly a decade until 1999.

David’s expertise and insights in resilience and leading under pressure has been sought by clients worldwide. David helps improve team resilience, and self-leadership skills. These add value to any client event or sustainable change initiatives. David has a B.A. in Law from Cambridge University, and a workshop leader with 20 years’ experience delivering 50 solutions annually in motivational, leadership and team skills across 75 cities, and 33 countries (and still counting!).

David’s presentation style is breezy with lots of humour, audience-interactive and backed not only by decades of leadership achievement, but also with the rigour of an understanding of how adults learn. This makes his solutions to a presentation or event programme so very different than just hiring an ‘achiever’ type of speaker who may lack a people-development background.

David is also a credentialed workshop leader, large-group facilitator and teambuilder. His leadership expertise has been widely profiled in The Wall Street Journal, and Singapore’s The Straits Times newspaper. As a mountaineer, The Sunday Times described him as “unstoppable” after he summitted his 7th virgin peak in a 2012 expedition.

A past President of the Asia Professional Speakers (2007-8), his work has also included being an adjunct lecturer for INSEAD Business School (2000 – 2015). David hasn’t given up climbing and is a veteran of over 70 alpine and expedition ascents around the world, and achievements in recent years have included scaling 6000-metre virgin peak in Qinghai and making the first single-day, mobility-impaired ascent of the 4092m Mt Kinabalu in Borneo.

David is a CSP (Certified Speaking Professional), the first and only Singaporean to be conferred the highest designation for professionalism and consistent quality by the National Speakers Association and the Global Speakers Federation (GSF). The CSP is an independent audit of five years information on the firm’s quality, processes, and maturity. He joins a group of fewer than 12% of 6000 professional members of the GSF who have this accreditation.

David also received in the new Global Speaking Fellow designation in Dec 2013 -The credential conferred on those who have proven mastery of the core global speaking competencies, with fewer than 30 professionals worldwide having attained this credential.