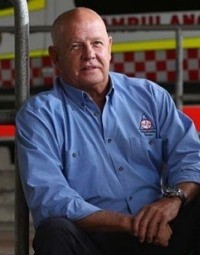 Paul Featherstone dedicated over 40 years of his life to serving the community as an ambulance paramedic until his retirement in 2013. However, many of us believe that Paul has taken these duties and his commitment to far beyond what would normally be expected of someone within this role. You only need to read the many tributes he has received from victims, colleagues and people he has come into contact with throughout his life to understand what drives this inspirational person.

Paul does not seek accolades but simply wants to make a difference to those less fortunate than himself. He is a humble, unassuming man and when the spotlight is thrown upon him for his selfless acts of heroism, he quickly points it back in the direction of his colleagues in the Ambulance Service and the “team” effort.

Paul grew up in working class Marrickville and started his working life as a toolmaker. It was during these early years that Paul witnessed first hand a horrific industrial accident. Paul was so impressed with the ambulance officers’ efforts in freeing this young man that a few months later he joined the Ambulance Service himself.

The majority of Paul’s training has been with the NSW Ambulance Service, however, few people have covered such a broad operational spectrum. In order to ensure his own quality control, Paul has acquired certified knowledge from outside sources as well as the Ambulance Service.

Prior to 1986 ambulance officers could find themselves in some very precarious situations in attempting to access patients in rugged terrain, down cliff faces, trapped in rocky caves, etc. Ambulance officers did not possess the necessary skills to safely access people in these types of situations in order to administer care. Following a couple of high risk incidents in Sydney, Paul came up with the idea of developing a special ambulance unit consisting of professionals highly skilled in reaching people in difficult and inaccessible circumstances. In 1986 after much research, deliberation and over 700 hours of gruelling training, the first Special Casualty Access Team (SCAT) was operational. Three years later Paul was a certified SCAT instructor, focusing his time and energy in developing and training new team members.

Paul has put his life at risk on countless occasions in order to save the lives of others. There are several high profile disasters that Paul Featherstone has been involved in, i.e. Granville train disaster, Stuart Diver Thredbo landslide rescue, Beaconsfield Mine rescue, however, these are just the tip of the iceberg. Paul has literally saved hundreds of lives all over Australia and beyond, these are the truly inspiring stories where lives are saved and families reunited. He has served as an inspiration to not only those people within the ambulance service or thinking of a career in this field, but he has also served as an inspiration to the community at large.

Yes, it could be said that the above is all part of Paul’s job, however, not many people would continuously place themselves in high risk situations, preferring to do so rather than send in another colleague with a young family to support. In addition to his regular Paramedic duties, Paul has played a role in aiding multiple victims from countless major emergencies. In 2002 Paul flew to Bali to assist in the devastating aftermath of the Bali Bombings. Having been personally affected with close family friends losing a daughter, Paul offered his expertise and knowledge to medical authorities as well as providing support and counselling on a personal level to those affected.

Paul has been heavily involved within the local community for many years and this was recognised in 2007 when he was honoured as the Sutherland Shire Citizen of the Year and Australia Day Ambassador. Paul has been an Australia Day Ambassador since 2007, travelling to regional areas to partake in celebrations. Paul was also named on the 2007 Queen’s Birthday Honour List and awarded the Ambulance Service Medal.

Paul has twice been the recipient of the Ambulance Service’s highest award for bravery, and has also received the Distinguished Service Medal, the Australian Bravery Medal, the Humane Society’s bronze, silver and gold medals and the Prince Phillip Helicopter Rescue Award. Paul has also been honoured with the Rotary Club’s highest award, the Paul Harris Fellow.

Paul Featherstone is an experienced public speaker and where possible, gives freely of his time to speak at various charitable organisations and local community clubs. Paul has a keen interest in helping our youth and has been involved with the Kids Breakfree Charity, an organisation which provides alcohol and other drug education and support programs to children and the community. His inspirational and motivational stories and leadership programs are always well received.

Paul’s desire to help our youth make a difference in their lives recently saw him donate hundreds of copies of his book “With Spirit and Courage” to local schools to be used as an inspirational and motivational tool for our future leaders or as a fundraiser for our schools. Paul is an inspiration to so many of his fellow Australians:-  ambulance service colleagues, victims of tragedies, he has been involved in  local communities where he has offered his time and energy,  school children and young leaders whom he has invested his time and inspiration. He truly is an outstanding Australian.