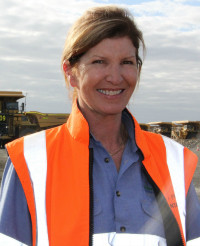 Helen’s passion for workplace safety commenced following the death of her husband, Steve, in an underground mining accident in Norseman, WA in 1991. The accident left Helen a widow in her early thirties with three young children to raise. At the time of Steve’s death, mining fatalities were largely ‘normalised’ by companies and government regulators. The deaths were considered an inherent risk of the industry, with virtually no support offered to families to enable them to move forward with their lives. One of Helen’s coping strategies was writing. She wrote to her husband Steve, but also to herself and her children leading to the publishing of her first book some years later, “Just a Number”.

“Just a Number” outlines her family’s journey in the five years following Steve’s death, as they traversed the quagmire of emotional, legal and bureaucratic processes that constitute life for a bereaved family following a workplace death.

Since writing Just A Number, Helen has been travelling extensively across Australia as well as overseas campaigning for improved safety and better support for bereaved families. She also delivers safety focused presentations to companies across all sectors highlighting the importance of both parties’ commitment to safety at work.

Helen’s commitment and passion culminated in the establishment of Miners’ Promise in 2010. Miners’ Promise is a not-for-profit organisation established to provide emotional and practical support to members and their families following a crisis event such as a death, illness or serious accident. Helen served as a Director on the Miners’ Promise Board for several years including a number of years as Chairperson.

She is a recipient of a WA Local Hero of the Year Award, a category of the Australian of the Year awards. She continues to speak prolifically to corporations across all industry sectors.