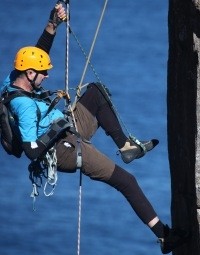 Paul was a cutting-edge rock climber and mountaineer hailing from the UK. His adventures took him from Wales to the Himalayas, the Karakoram to Patagonia, Baffin Island to the Pamirs and the European Alps.

When he won the Boardman/Tasker Award for mountain literature in 1997, with his book Deep Play, he spent the prize money on a world climbing tour that found him in Tasmania climbing a slender sea stack known as The Totem Pole. It was here that all he had known before was turned on its head.

On Friday the 13th of February 1998 a TV-sized boulder falling from 25 meters inflicted such terrible head injuries that doctors thought he might never walk or even speak again.

Being in hospital for a year gave Paul the impetus to write his second book: The Totem Pole in 2000. This narrative about his personal journey through hemiplegia also won an unprecedented second Boardman/Tasker prize, and the Banff Mountain Book Festival Grand Prize and was translated into four languages. Nominated for the Banff Prize, The Longest Climb followed in 2005.

He has continued to lead a challenging life, climbing Kilimanjaro, caving, river rafting and lead rock climbing again. Paul rode a recumbent trike through Tibet to Mount Everest and, in 2016 he finally climbed the Totem Pole, 18 years after his accident (the subject of an ABC Australian Story).

Paul has spent his time since the accident in contemplation of the hemiplegia which has robbed his right side of movement and continues to play tricks with his speech and memory. He sees the accident as a gift and describes it as the best thing that has ever happened to him. He is a passionate believer that without the mountains he climbed, and moreso the Totem Pole accident, he would not have learnt some crucial life lessons.

Those lessons learned in the mountains got him through a harrowing injury, and the painfully slow recovery process has engendered a life lived in the moment.

"I use them still, repeatedly, each day of my second, radically different life."

Paul continues to go on adventures, gives talks at events around the world, and is an award winning author.

Paul Pritchard demonstrated that in sport as in life, difficulties can be overcome with passion, commitment and dreams.

Paul's presentation was inspirational. He certainly engaged the girls and earned their admiration. A number of girls said to me it was the best Principal's Assembly we have had ... he will be a hard act to follow!