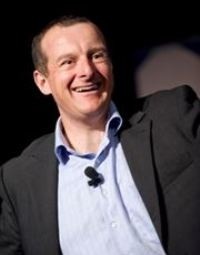 Michael Milton is one of Australia's best-known athletes. His four-gold-medal haul at the Salt Lake Winter Paralympic Games endeared him to a sport-loving nation and earned him the title of Laureus World Sportsperson of the Year with a Disability.

In April 2003 Michael tried something new: speed skiing, the drag racing of alpine sport. On the steepest slope in the world he clocked over 193km/hr, smashing a 16-year-old world record and becoming the fastest skier with a disability.

Every year after that he bettered his own world record until, in April 2006, he clocked a staggering 213.65km/hr to also become the fastest Australian skier ever.

He then pursued a new sport: cycling. After six months of intense training, he not only won a gold medal in the 3000m Individual Pursuit at the Australian Track Cycling Championships in February 2007 but also broke the Australian record.

His dream to make the Australian team and compete at the 2008 Beijing Paralympic Games was sidelined when he was diagnosed with Oesophagael Cancer in July 2007. He then made an amazing comeback from this serious illness to record times at the 2008 Australian Track Cycling Championships comparable to his results in the same events 12 months before.

In June 2008 Michael was named as one of 18 athletes in the Paralympic Cycling Team to compete in Beijing. His sixth Paralympic Games and his first as a summer athlete, he arrived in Beijing less than 12 months since chemotherapy radiotherapy and major surgery. In many ways, he'd already won.

Michael competed in three events - the 1km Time Trial and the 300m Individual Pursuit on the track and the 60.5km Road Race. Read more about his races and how he feels about his performances on his Beijing Blog.

Michael has raced in the Mark Webber Challenge, a five-day adventure race in Tasmania and in the 293km long Coast to Coast Kokoda Challenge. He has climbed Mt Kilimanjaro and walked Kokoda twice.

His latest passions include mountain biking and triathlons. He has competed in two World Paratriathlon Championships in 2012 in Auckland, New Zealand and in 2011 in Beijing where he finished fourth.

Most recently, Michael completed his first ever marathon. Aiming to break the existing Guinness World Record for Fastest Marathon on Crutches (one leg) which stood at 6 hours, 42:47, Michael smashed it in a time of 5 hours, 23:50. The record is yet to be ratified.

Michael's story is the stuff of legends, his determination to win something to which we all aspire. He talks about facing his own mortality, prioritising his life, dealing with the cancer.

Michael thank you for such an inspiring presentation. Your story is truly amazing… your strength, courage and passion for life is contagious. Your bar is set high and it has left many of us thinking about our own personal and professional goals. Good luck with your future endeavours… I get the feeling there are many more chapters to be added to the Michael Milton story.

Thank you for your contribution to our 10th Anniversary celebrations. You made a deep impression on all the participants! I was delighted with your contribution and as I had imagined, your thoughts, approach and insights provided us with a wonderful beginning to what were to prove an excellent couple of days. The participants remarked on your tenacity, persistence, spirit, enthusiasm and courage. To have someone display these qualities with such transparency, was a gift to us and you left your mark on the memories of all of us who had the privilege to listen to you. Thanks for giving us a piece of yourself, and thanks for your openness, the demonstration of risk taking, hard work and a confidence to back yourself, all important qualities for us to take into our next ten years.

Your speech, highlighting some of the positive things about having a disability, and the incredible problem solving skills disability requires a person to develop certainly bought home this aspect of the day for me. The feedback from my colleagues has been very positive; the thought of skiing down an almost vertical slope certainly made an impression! It was a pleasure to meet you, and thank you for sharing your experiences with us.

Department Of The Prime Minister And Cabinet