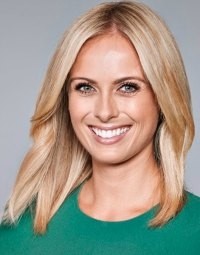 An established journalist and one of the most versatile members of the Nine Network’s top-rating news and current affairs team. Brand ambassador and highly sought after MC and corporate facilitator.

Sylvia Jeffreys has established herself as one of the most versatile members of the Nine Network’s top-rating news and current affairs team.

A trained journalist, Queensland-born Sylvia launched her television career with Channel 9 in Brisbane, her reports, in particular, on the devastating 2010-2011 Queensland floods, which claimed 38 lives, and the highly-powerful and destructive tropical Cyclone Yasi in early 2011, winning high praise from the network.

Since transferring to the Nine Network’s Sydney headquarters in 2012, Sylvia has become one of the most familiar faces on news and current affairs programs.

Since 2012, she has filed stories for Nine News, been the Today Show’s Sydney reporter and newsreader, co-hosted Weekend Today and presented the weather on Sydney’s highest-rating evening news bulletin.

Sylvia has also filed stories for the Today Show from New York, reported from the scenes of major bushfires and floods across New South Wales and interviewed some of the world’s leading celebrities, soccer legend David Beckham being one of the most recent.

Away from the Nine cameras, Sylvia has made her mark as an experienced MC, having hosted a range of charity and corporate events. She is also a dedicated ambassador for Queensland charity Youngcare which seeks to find housing for young high care Australians.

A self-confessed social media devotee, Sylvia’s strong Twitter and Instagram following reflects her understanding of the importance and value of interacting with viewers and peers.

It was a pleasure working with Sylvia again at our AIA Vitality 4490 Summit. Sylvia led a fantastic Q&A with our keynote speaker Venus Williams and managed to set the perfect tone for the event. Conversational and informal, discussing topics that really resonated with our audience. We would highly recommend Sylvia for speaking events of this kind and look forward to working with her again in the future.n

I have known Sylvia for nearly 5 years. Sylvia was the MC and host at our Melbourne Cup Day lunch at CHISWICK Restaurant in 2013. We have done many Melbourne Cup events at all of our restaurants over the years and Sylvia was, without doubt, the most impressive MC we have contracted. Sylvia is engaging, intelligent and captivating and as an MC strikes the perfect balance of professionalism and warmth. I would highly recommend her as an MC and I am confident she would be capable of hosting any type of event.