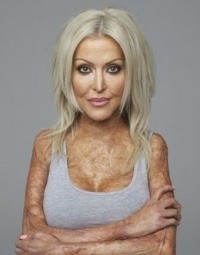 Dana made international headlines around the world when she publicly removed her compression mask for the first time on Channel 7’s Sunday Night program, revealing her face, which had been covered for two years and eight months. From this moment, she became a recognisable figure of survival worldwide and has used this profile as a platform to speak out and reach those in need of encouragement and inspiration.

Dana Vulin was born into a tight-knit family, with two older sisters and a twin brother. She and her family lived in the small community of Koolan Island off the coast of Western Australia during her early childhood, before relocating to Perth when Dana was 6 years old. Dana was a cheeky, confident kid and built a rich network of friends throughout her time at school. On completing high school, Dana enrolled in a Bachelor of Communications at Edith Cowan University, where she graduated with majors in Advertising and Business, Management.

At the age of 25, Dana faced a turn of events that would change her life forever, a violent and unprovoked attack at the hands of a disturbed woman. Dana’s attacker had been stalking her for months, jealousy motivated by a completely delusional and false belief that Dana was involved with her estranged husband. During the early hours of February 16th, 2012, this woman broke into Dana’s apartment with a male accomplice, doused Dana with methylated spirits and set her on fire whilst laughing and watching her burn alive, causing horrendous third-degree burns to 64 percent of her body and face. Within seconds, Dana’s former life, her physical functioning, her independence, her goals and dreams were ripped away. The destruction caused to Dana’s body and face was unimaginable, the pain that she endured was indescribable. Upon admission to hospital, Dana was placed in a coma for 10 days, after which she woke to face the horror of what had been done to her.

In 2013, the District Court found Dana’s attacker guilty of intentionally causing grievous bodily harm with intent and sentenced her attacker to 17 years in prison (15 years without parole). This sentence pales in comparison to the lifelong scarring and rehabilitation that Dana has been left with. Since 2012, she has undergone countless agonising functionality graphs and necessary reconstructive surgeries, as well as Occupational Therapy and daily physical therapy. The first few years after the attack was the most difficult period in Dana’s life. Despite the damage that the fire wreaked on Dana’s body and entire life, her fighting spirit and sheer determination to live were not and cannot be destroyed.

At the end of 2013, Dana encountered yet another major hurdle with a routine pap smear revealing cervical cancer. While this diagnosis would be daunting for most, for Dana at just 27 it signalled that there would be even more surgeries to brave and mental hurdles to break through. Dana has fought blood tears and unimaginable pain to be where she is today – ALIVE. Dana is enthusiastic about continuing with the medical and cosmetic treatments that will allow her to build on the outcomes that she and her doctors have already achieved to date. She hopes her journey will inspire other burn survivors and all who face adversity. Her uplifting achievements have been set against a backdrop of painful and prolonged medical procedures, proving that you CAN overcome the odds.

Dana has discovered a new zest for life and wants to inspire others with her own miraculous story of survival. She is living proof that beauty does come from within and she hopes her message motivates those facing adversity including; those who are victims of injury, violence and disfigurement, those battling cancer and those battling their own demons.

When we were looking for a host of Kalgoorlie Fashion Week, Dana Vulin was a sure stand out. Her love of life and fashion meant we were guaranteed a beautiful show. Thrown into the deep end, Dana was able to keep the crowd entertained with her witty banter and seamless interaction with the audience.

Every term, we invite Dana Vulin to speak with our aspiring models about perseverance, motivation and overcoming hurdles in their early careers and life itself. As the founder and mentor for Model Camp Australia, I truly believe there isn’t anyone more suited to this job than Miss Vulin herself. Her story is overwhelming - filled with courage, self-acceptance and determination. A perfect mirror to guide and inspire my students on their journey. And they absolutely love her.

LiveSmart recently organised a 'Ladies Empowerment' event to provide a platform to celebrate the inner strength of women. I could not have selected a more suitable speaker to address my audience. Miss Dana Vulin delivered her story of survival, determination and hope with such inspiration; exactly the aim of the event.