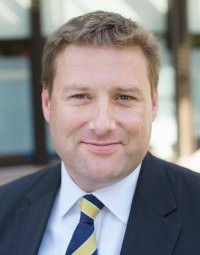 Neil is passionate about productivity at a macro level and is an active advocate of economic growth and the creation of public and shareholder value. Neil is known for his no-nonsense advice with a focus on practical ways to leverage data for social and economic benefit.

Neil is the founder and chair of information and data management firm, growing the business from his kitchen table into the respected national professional services company it is today.

Most recently Neil developed, a data-driven service that understands the political, social and economic activities in a given geographical region, ultimately empowering decision makers in this growing age of political apathy.

As a passionate advocate for open and transparent government, Neil is a founding director of Community Data, a specialist in powering a more effective and accountable government. With his comprehensive understanding of data, Neil knows that assembling these into meaningful insights for decision making is a critical enabler for better government.

Working alongside all levels of industry and government, Neil has had a particular focus driving civic innovation and smart community strategies at the local government level, helping to grow Australia’s regional economies from the outback to the coast.

Neil is a trusted advisor with private sector organisations across multiple sectors throughout Australia, New Zealand, and Asia and is retained by several public and private entities in a governance function.

A respected keynote speaker and inspiring storyteller, Neil is regularly called on for his to-the-point commentary and signature presentation style.

In his ‘spare’ time, Neil was the driving force behind the formation of the charity, Mates 4 Mates. His founding vision and leadership ensured a focus on supporting a new generation of service personnel.

Neil spent his formative years in senior leadership roles within the military and received a noteworthy commendation for his service. During his military career, Neil supported the social and economic stability of multiple countries, delivering critical services in the face of extreme risk to underpin domestic, foreign and defence policy.

Neil’s ability to inspire audiences is unparalleled. He has a unique ability to translate seemingly complex digital agendas into simple applicable business outcomes for audiences at all levels of management.

Neil’s presentation style is engaging and refreshingly down-to-earth. He delivers complex data and innovation information in a compelling, easy to understand way, and he draws out grass-roots issues and offers practical solutions.