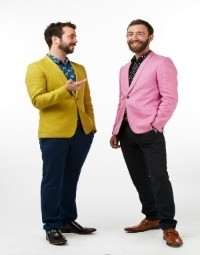 Future Crunch are part of a global movement of scientists, technologists, hackers and creatives that think there are new and better ways of doing things in the 21st century. Their expertise ranges from politics, economics, and bioinformatics to design, art and music. They use their diverse knowledge to provide unexpected perspectives on the world, through the lenses of science, technology and social theory. Their mission is to foster intelligent, optimistic thinking about the future, and to empower people to contribute to it.

Angus is a political economist, journalist and media commentator specialising in the impact of disruptive technologies on society. He is the former community manager for Random Hacks of Kindness, the longest running and largest social hackathon in Australia, and the former editor of Global Policy, one of the world's leading international policy journals. He holds a Masters in Political Economy and a PhD in Government from the London School of Economics, where he was also the Ralph Miliband Scholar between 2009 and 2012.

Tane is a science communicator, futurist and bioinformatician. He has worked for the Royal Children’s Hospital diagnosing rare genetic diseases in children and is currently completing his PhD at the Peter MacCallum Cancer Centre in Melbourne, using molecular biomarkers and artificial intelligence to better understand, diagnose and improve treatment for people suffering from cancer. He is also a former US mountain biking champion, and an avid sailor, participating in races around the world.

Future Crunch’s talk was the best presentation on the state of the world I have seen in years.

While anyone who includes a quote from Carl Sagan in their presentation will get a thumbs up from me, I consider the offering from Future Crunch to be outstanding. Their presentation on the important role of science, the need for critical thinking and the optimism we should hold for our future is unique and probably needs to be delivered to everyone in Australia. nnBefore a recent development event for our attorneys, I was questioned on why we were having a scientist and an economist taking up the first 90 minutes. By the end of those 90 minutes in which everybody sat enthralled, our team was full of questions and asking for more. If you get the chance, go see them. You will be entertained, informed and feel so much better about the world and its prospects.

Future Crunch delivered a mind-blowing keynote presentation at our inaugural tech event. We couldn’t have asked for a better opening act. Their collective knowledge of current and emerging technological trends and developments is truly inspiring. They are highly entertaining, engaging and thoughtful presenters. Smart organisations understand the need to embrace technology and there’s no better thought leader and educator than Future Crunch.

The Real Estate Institute Of Queensland