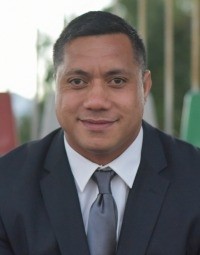 Sione Faumuina is an amazing inspirational speaker. He is a former professional athlete and he has featured in Sydney Morning Herald, Daily Telegraph and appeared live on ABC Breakfast Show. He is an expert in turning a setback into a comeback and is on a mission of helping individuals and teams achieve success.

In August 2009, after nine years as a professional athlete and earning well over a million dollars Sione was left with nothing. Broke and battling an alcohol addiction he had well and truly hit rock bottom. There was a major turning point in Sione's life and that was the birth of his first child. Overcoming his alcohol addiction Sione started to realise his true potential and began the journey to becoming the absolute best version of himself. It was Sione’s difficult journey that enabled him to develop a mental resilience and strength that gave him the tools to not only turn his life around but inspire others to do the same.

Sione speaks openly about his story and life after professional sport in his conference keynote presentations. He was sacked from 3 out of the 4 professional clubs for numerous off-field alcohol indiscretions and arrests, which overshadowed his on-field achievements.

Sione’s story is simple, yet his message demonstrates the awesome power and strength found within the human spirit when faced with the choice to continue going down the path of self-destruction or turn around and begin the journey to redemption. Forever the opportunist Sam chose redemption and is now success strategist and a hugely successful keynote speaker, reaching thousands of people in Australia and New Zealand and has reached over 2 million people through online social media outlets.

Sione is at the forefront of global trends and has the unique ability to transform impossibilities into possible realities. Sione’s thought leadership is in corporate and personal turnarounds and his message called Real Talk Equals Real Results.

His powerful message will challenge his listeners to be truly who they are and to believe in all that they have to give. He provides the skills to be resilient, overcome fears, and to achieve goals and dreams that we may think are unachievable.

Sione walks his talk, and it is through his experience that his authentic message is heard. After all, we only have one life.

Sione released his book The Second Phase and is in the process of writing a follow up.

Sione was an entertaining, passionate and engaging speaker. In all honesty I was expecting another ex-football player to talk about his glory days, however Sione spoke briefly about his rapid rise to fame and his downfall. He then went onto how he has used life’s hard lessons to himself the person he needed to be.

I wish to thank Sione Faumuina for his contribution to our NRL Wellbeing Education Summit where 197 professional players and staff attended. The method with which Sione projected his story to the attendees was very unique and engaging by way of his genuine honesty and heart-felt message. The attentiveness of the crowd, riveted to his ‘every word’ delivered the most positive feedback and help make the day a success. To see and believe that a person can still achieve after very tough times is indeed great education for young men. nn

Sione is very friendly and approachable business person and presenter. He engages with all his audience. With Sione’s background and experience, he understands what can happen in life and in business. The information that Sione’s shares is very relevant to people who are looking to progress and become more successful. nnI recommend that you should engage Sione as a guest speaker if you are looking for someone who is engaging and has experienced life’s journey on various levels. n