Anh Do Travels from Sydney, NSW 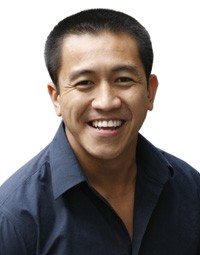 Anh Do is a risk free corporate comedian with a witty clean and friendly stage presence, which makes him one of Australia's most popular comedians. A few years ago, Anh Do left a job at a consulting firm to become a corporate comedian. His background in the business world provides him with a unique insight into what is required for the perfect corporate event - he is renowned as the comedian who is absolutely corporate friendly.

Anh Do has won all the comedy awards around town, including the Sydney Comedian of the Year, and appeared multiple times on popular shows such as Thank God You're Here, Spicks and Specks, Rove Live, and The Footy Show. Anh Do also competed in the 2007 series of Dancing with the Stars.

You may have also seen Anh Do as a guest actor on Seachange, All Saints, or Pizza, or even in those Cornetto ads. He has worked acting opposite Cate Blanchett in the movie “Little Fish”. Then there’s “Footy Legends”, a feature film backed by Mel Gibson’s production company Icon. Anh Co-wrote “Footy Legends” and also appeared in the lead role.

In 2003 Anh co-produced with his brother the film “The Finished People”. The film, described by Margaret Pomeranz as ‘one of the best Australian films of the year’ was officially selected for the Montreal International Film Festival and released by Dendy in Australia to rave reviews.

In 2011 Anh won the top prize for his novel 'The Happiest Refugee' at Australia’s top book awards, and in 2017 he won the People's Choice Award at the Archibald Prize for his portrait of actor Jack Charles.

Anh is still one of the most sought after stand-up comedians still on the circuit today and has performed every major comedy venue in Australia and New Zealand, recently entertaining sell-out audiences at The Sydney Opera house.

Anh was nominated for a 2018 Logie Award for most popular entertainment program for his Anh's Brush with Fame Season 2.

From after dinner entertainment to conferences, client parties and product launches, Anh Do has delighted hundreds of clients including Telstra, McDonald's and Toyota.

Anh ensured that everyone had a good laugh without detracting from the dignity of the function and the prime minister. It was a truly professional performance.

Anh is the consummate professional and took a lot of time to learn about our business and the people involved - he has a strong inspirational message and is just a great performer - I'd recommend Anh unreservedly.