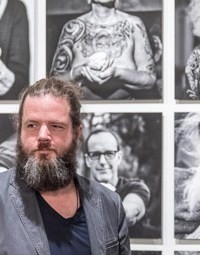 Stu Robertson's artistic practice has developed and been refined over 20 years, and in the past 18 months his photographic work has gained huge momentum internationally. Committed to a purist approach, Stu trusts in elemental light and composition to draw his visual narratives. His obsessive compulsion is restrained by the frame of dimensions in time and physical space.

Accepted into a prestigious photography course at the age of 17, Stu decided to instead qualify in marketing and advertising. He spent time experimenting with commercial photography in the 1990s and early 2000s while simultaneously focusing on building a collection of businesses in the creative fields of advertising, publishing, production, catering, brand activation and events.

In 2011 he stepped back from his operational position as MD of The Orange Group, to focus fully on his artistic practice and passion for photography. The decision has seen him traverse many countries and cities, camera in hand, developing a prolific body of work that captures his alternate and haunting view of architecture, people, events and conversations.

In 2012 Stu and his business partner opened ''studio66''' in Queenstown, New Zealand, a 2000 sq ft gallery space that is also used as a studio and project office for this project, Peace in 10,000 Hands. Peace in 10,000 Hands draws inspiration from Stu's compulsive photographic eye, and his desire to both make the world a better place and to create history through art.

The project ‘Peace in 10,000 Hands’ will see him continue to travel the world over the next three years and will culminate in an international exhibition, book and film that will further the conversation for peace and allow him to raise funds for charity and peace along the way.

He is the first New Zealand photographer to be featured and supported by Leica, the world’s oldest and most respected camera brand. In August 2013 he was invited to lecture as the featured artist for the Leica Street Photography workshop in Los Angeles.

Stu’s passion for seeing the world through an alternate view runs deep. His grandfathers were both prolific photographers with their own darkrooms, and their love for the medium underpins the artist's own obsession. Stu has also been selected for representation by respected art curators and collectors David Teplitzky and Peggy Scott from Conceptio Art, whose extensive modern art collection is exhibited in galleries and museums on every continent.

Peace in 10,000 Hands is a global art project designed to challenge and reinvigorate the conversation for peace. "A single white rose held in the hands of 10,000 people from every country and every walk of life. It is a concept that speaks profoundly to our similarities in the human condition and explores the essence of peace."

The scale of the project has started to generate a global conversation illustrating that, despite mankind's differences, we share a universal desire to hold peace in our hands for the next generation.

The exhibition is set to become a provocative and insightful exploration into the very meaning of life. Currently Peace in 10,000 Hands has over 1,000 photos, covered 9 of 195 countries and 40 or 248 nationalities. The lessons learnt on the way:

-Nobody says no to peace

-The number of people offering help is humbling and grows daily

-People love the images and artwork

-People open their doors and hearts to peace, there are fewer borders than we ever imagined.

The plans of the project are to also curate the art works into a powerful international exhibition including photographic art books, children's books, TV and film, donate artworks to charities and to become a global resource for peace. Their aim is to create a lasting conversation for peace, to generate many millions of dollars to support organisations that focus on educating children on how to apply tolerance and knowledge to build a more peaceful world.