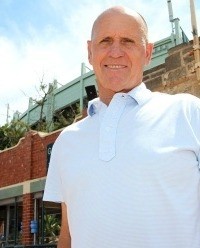 In 1979 Grant Dorrington was awarded the British Empire Medal (BEM) as part of the Queen’s New Year Honours list with the following citation 'in recognition of outstanding efforts in the planning, organisation and marketing of Western Australia 150th Anniversary Celebrations 1979'.

Later 1983 he assisted in the co-ordination of the Western Australian Government’s ‘Welcome Home Celebrations’ for the victorious America’s Cup Australia II crew.

From a teaching background, Grant is also a sought after Public Speaker in the areas of motivation, teamwork, self esteem and creative thinking. As an accredited Sports Administrator he is also a lecturer in Administration courses.

Grant consulted with the owner of the Perth Glory on the planning and establishment of that team. Having been involved in all levels of the Australian Football industry, from league player, coach, team managers to administrator, he has a ‘hands on’ background in sports management at every level.

Since 1983, Grant has been involved in management roles that have required the ability to create a new image through innovative thinking, planning and marketing.

These include: The restructuring and marketing of the Education Department’s Aquatic programs; Establishing football’s innovative junior management structure – the Football Development Trust; Overseeing major changes to senior football at the West Australian Football Commission; Assisting with the establishment of the Fremantle Football Club (Dockers) in its first two years within the AFL.

Grant retired from the West Australian Football Commission where he was overseeing the transition of this historic 116 year old State League competition, to a new era for the 21st Century.