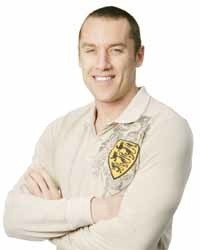 Anthony Koutoufides was a highly athletic and much decorated Australian rules footballer with the Carlton Football Club and onfield leader. During his AFL career he played 278 Games, made 226 Goals and was Premiership Player in 1995 and Leading Goal Scorer (28 Goals) in 1997. He also made numerous television appearances including Dancing with the Stars (Champion) and the television series Gladiators in character as Kouta, 'a Gladiator touched by the gods'. In recent times Anthony has been a panelist with Bigpond Sports Weekend and Channel 7’s - AFL Game Day.

Beginning his AFL career in 1992, he quickly established himself as one of the most versatile and athletic players ever to play the game. He was a strong mark, a beautiful kick and a hard runner.

Of Greek and Northern Italian heritage, Koutoufides made a choice to switch from track and field athletics to Australian Rules Football citing the love of team sports as the reason behind his decision.

Anthony Koutoufides rose to greatness in 2000. He was clear favourite in the Brownlow Medal, but suffered a knee injury in Round 20 against Essendon in front of 91,000 fans. He would also fail to win Carlton's best and fairest, that prize shared between Brett Ratten and Scott Camporeale, but he won the prestigious AFLPA MVP Award (now the Leigh Matthews Trophy), and would gain All-Australian selection for the second time; his knee injury would prevent him from taking part in the International Rules series.

Anthony Koutoufides' injury was healed before the start of 2001, and he had another stellar season, finally winning his first club best and fairest. However, in the semi-final against Richmond, he again sustained a knee injury, this time a very serious torn anterior cruciate ligament.

He would not play again until Round 15, 2002, playing only three games in that year, and wearing a specially designed game-day knee brace. Anthony Koutoufides' capacity to jump was severely limited for the following years.