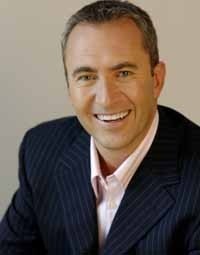 Mark Beretta is the sports presenter on Australia’s number one breakfast show, Sunrise. He has worked in the media for over 20 years, in radio and television across News, Sport and Entertainment. Mark also has a degree in Engineering, and worked with BHP and Honeywell, prior to entering the media.

The 45 year old is a veteran of seven Olympic Games telecasts, the host of Australia's Greatest Athlete, a commentator for Seven's V8 Supercar coverage, and proved a favourite on Dancing With The Stars series 7. He is also one of Australia's most in-demand Master Of Ceremonies, and guest speakers. Mark is a 10-times Australian Water Ski champion, a silver medalist at the Singapore International Masters, and held a U.S. record.

Mark joined the Tour de Cure cycling team in 2010, biking from Sydney to Sunshine Coast to raise funds for cancer research. He returned to complete the Sydney to Melbourne Tour de Cure ride in 2011 and he currently sits on the board of the organisation. He is also Ambassador for ChildFund Australia, Fight Cancer Foundation, Australian Paramedic Support Foundation and the Young Love Foundation.

Mark's experience in front of the camera, his charisma and warm personality makes him the perfect Master of Ceremonies or after dinner speaker at corporate events.

Mark has been part of some of TV's great successes like SUNRISE and the Sydney 2000 Olympics, and great failures, like his quiz show The Master that was dumped after one episode! He's taken lessons from the people and events along the way, and compiled them into his entertaining and informative chats.

With over 20 years with Channel Seven, Mark Beretta has seen a lot. Sunrise has been Australia's Most watched breakfast TV show for the past 9 years in a row. From Tiger Woods to Tony Bennett, Daniel Craig to Dannii Minogue, he's worked with or interviewed them all.