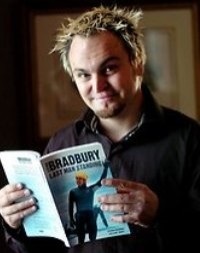 Speed skater and motivational speaker Steven Bradbury created history in Salt Lake City when he became the first Australian to win a Winter Olympic Gold Medal. His remarkable and unlikely victory was achieved after a spectacular final-lap spill took out his four rivals. Bradbury threw his arms up in disbelief and smiled as he crossed the finish line.

His career as an Olympic athlete was driven by determination and most importantly a will to succeed.  Some people have described Steven’s victory as lucky.  Winning Olympic gold took a lot more than just luck.  The same as in business, strategy and planning were key ingredients in that success.

With the same passion he showed on the ice, Steven has continued his success as a motivational speaker and after dinner entertainer to corporate clients.

His shares his message that, just like in sports, business is about showing up every day and giving it your best. When your moment to shine comes, will you be in position, and prepared to 'DO A BRADBURY'. As well as being entertained and inspired your audience will be left with a lasting impression that much of the prize is in the journey and that success takes passion, persistence and teamwork.

The four-time Olympian hails from sun-drenched Brisbane, and followed his father into the sport. He was a member of the 5000m relay team that won Bronze in Lillehammer – Australia's first Winter Olympic medal.

His warm friendly nature, down to earth manner and use of humour is sure to help 'break the ice'. The Bradbury story is one of the true Aussie battler who overcomes much adversity to achieve the ultimate goal.

The story leading up to the Gold Medal win is what makes Steven's presentation memorable and unique. His story touches a chord with people from all walks of life and is a prime example to all that if you "stick it out", you too can be the last man standing.

A feature film about Steve's life has been approved, and is due to be filmed in 2020.

Thank you again for entertaining our guests and for being our MC. We have had some fantastic feedback and we will definitely keep you in mind for further functions.

There has been nothing but praise and thanks from all who attended, especially regarding your humour and relaxed style behind the microphone. We also appreciated your preparedness to mix with the invited guests after the event.

Just wanted to drop you a line to thank you for MC’ing our event yesterday. You were extremely well received, highly entertaining and delivered inspiring content.