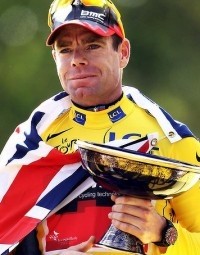 Cadel Evans is the first Australian to win the Tour de France. Twice in the past Cadel has had victory within sight, but was heartbreakingly beaten by Spanish riders with Alberto Contador who claimed the honours in 2007 and Carlos Sastre who proved to be the only person too strong for Cadel in 2008. In 2010 Cadel briefly held the race lead but a cracked elbow put paid to his hopes of victory. Finally in 2011 Cadel Evans claimed the 'holy grail' of road cycling and was crowned the winner of the Tour de France.

In June 2013 Cadel was honoured in the Queen's Birthday Awards as a Member of the Order of Australia for his service to cycling and the community.

He raced his retirement race in February 2015.

Not only was Cadel the first Australian, he was also the oldest athlete to win the tour since 1923. Physiologically and despite his age, Cadel is said to have the best numbers of any cyclist tested at the Australian Institute of Sport. He was considered to be potentially one of the world's best; and that's exactly what Cadel became.

Cadel was born on the 14th February 1977 in Katherine, in the Northern Territory (Australia) and much of his childhood was spent in Aboriginal communities.

From spending time on a skateboard in his early teens he soon focused on two wheels instead of four and found his passion, which in 2007 resulted in him being named the Australian Sports Performer of the Year.

After countless near misses he won his first world title in 2009 and spent the following year wearing a rainbow jersey. He was a four time Olympic representative and finished 9th in Atlanta as a 19 year old. After finishing 7th at the Sydney Olympics he changed disciplines and went on to claim a gold and a silver medal at the 2002 Commonwealth Games.

Few noticed him in his first Tour de France, when in the last week he was photographed on the final climb of the stage alongside the leaders Lance Armstrong and Ivan Basso. But he was determined to succeed and in his debut year he finished eighth.

But who is this dedicated sportsman? And what has been his formula for success? Cadel was first noticed in 1994 when he rode to fifth position in a cross country race. Since his teens he has been a professional cyclist - half his life. He is a competitor who refuses to allow ego to dictate strategy. He received a monthly program that set out his schedule day-by-day. It outlined in intricate detail the required elements that are to be fulfilled: how many hours, what percentage should be spent at what heart rate, specific cadences and the length of time he should be climbing. Nothing was left to chance. No matter what the weather the regime is followed to the letter.

Cadel released a book called ‘Close to Flying’. It is the behind the scenes story of the extraordinary dedication and hard work it takes to reach the highest level of elite sport. It gives a glimpse of the physical and psychological tests that are required to be the best, whilst giving an illuminating and fascinating look at the Tour de France - the teams; the climbs; the politics and the opponents that make it the most renowned cycling race in the world.