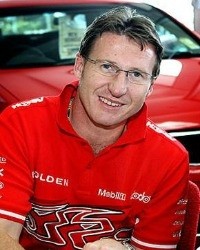 Mark Skaife is one of Australia's greatest ever touring car drivers. In his legendary 22 year career, Mark won five touring car championships and five Bathursts. He remains the most successful driver in Australian touring car history surpassing the late Peter Brock's record of 37 championship round victories.

Articulate, with a great sense of humour, Mark has been one of the great ambassadors for his sport through media and corporate appearances.

Like many professional racing drivers, Mark's career began in Karts in 1981 before progressing to race cars in 1984.

He was just 17. In 1987 he began a long association with Gibson Motorsport, which resulted in two Touring Car Championships, two Bathurst wins and three Australian Drivers (Gold Star) titles in open wheelers.

Skaifey joined the Holden Racing Team in 1997, co-driving with Peter Brock for his two last events. He won a hat-trick of touring car championships in 2000, 2001 and 2002 with HRT in a hugely successful dynasty.

The decorated driver is much is much loved by the motor racing fraternity. Despite his fierce will to win and intensity on the track, he always had time to sign autographs and chat with his loyal fans.

Articulate, with a great sense of humour, Mark has been one of the great ambassadors for his sport through media and corporate appearances. In 2004 Mark was awarded the medal of the Order Of Australia for his services to motor racing and charity work.

On top of that Mark is still a leader in promoting V8 Supercar racing and is sought after for input into car development, track safety and design.