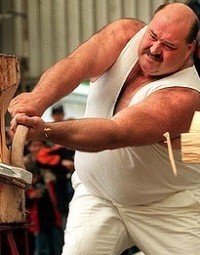 David Foster is the greatest woodchopper the world has ever seen. He has won over 2000 State, club and overseas events including 185 world titles and 140 Australian championships. David has captained the Australian team over 20 times, won the Australian 'Axeman of the Year' a record breaking nine times in a row and in 1990 was awarded 'Axeman of the Decade'.

He is a real achiever whose "the boy next door is a World Champion" story is an inspirational one, showing how it's done and that no matter where you come from, you can reach the pinnacle of a chosen career. Listen, laugh and be inspired by David Foster, "The big guy from Tasmania," who made good to become one of the greatest world champions in living memory.