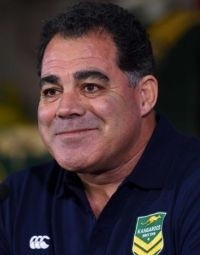 In his career Mal Meninga can list among his accomplishments an unprecedented four Kangaroo tours including the last two as captain, an Australian record 45 Test match appearances, a record 38 appearances for Queensland, five NRL grand final wins, and in 2012 coaching the seventh consecutive State of Origin victory for Queensland.

Mal was made a Member of the Order of Australia (AM) for his services to rugby league in 1994. He continues to remains a legendary figure in international rugby league, forever remembered for his formidable power, pace and handling ability and counted among the best players of the 20th century.

Committed to helping communities and charities, Mal’s profile and reputation has developed to the point where his celebrity and brand extends outside of rugby league circles. He has earned a reputation as a prolific speaker in recent years and also has a weekly column with the Sunday Mail newspaper. He has also undertaken several successful business ventures and continues to expand in the corporate world.

Mal led Canberra to their first premiership in 1989 after overcoming the Balmain Tigers in the Grand Final and again winning the grand final in 1990 against the Penrith Panthers.

In 1990 Meninga was named Britain’s BBC Overseas Sports Personality of the Year, the first rugby league player to win it. Big Mal captained Australia for 23 Test matches between 1990 and 1994, and captained the Queensland State of Origin team for three years from 1992 to 1994. He remains the only player to captain a Kangaroo Tour on two occasions, in 1990 and 1994.

On Australia Day 1994 Mal Meninga was made a Member of the Order of Australia “for Service to Rugby League football”. In 1994 Mal was successful again, winning the grand final against Canterbury Bulldogs.  He was appointed coach of the Raiders in 1997.

After his record-breaking run with the Queensland Maroons, Mal Meninga was named as Australia's 2016 and 2017 Kangaroos coach.