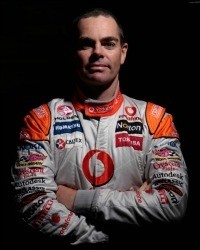 Craig has won more championships races than any other driver at the sport’s highest level, and is also the recipient of a record four Barry Sheene Medals, the sport’s best and fairest award.

He was recognized in 2012 with an OAM for services to both the community through his road safety work and to his sport.

One of the nation’s most popular sporting heroes, Craig Lowndes made an early debut in Australian motorsport, competing in his first event at just nine years of age.

Go-Karting was the starting point for the talented youngster, who quickly showed the potential to rise through the ranks, winning the national Formula Ford title in 1993 and the Formula Holden Silver Star class in 1994.  That success put him on the radar of prominent V8 Supercar team, Holden Racing Team (HRT), with Craig earning a drive in the endurance races and finishing second on debut at Bathurst in 1994.

Craig joined HRT fulltime in 1996 and was an instant success. He took out his first-ever championship round and went on to become the youngest ever Australian Touring Car Champion, before winning the Sandown 500 and Bathurst 1000.

After an international venture in 1997, Craig returned to Australia and quickly re-asserted himself on the V8 Supercar scene - winning the championship in 1998 and 1999. In 2001, he made the most controversial move of any Australian race driver, switching from Holden to Ford. After a handful of seasons with limited success, highlighted by podium finishes at Bathurst in 2003 and 2004, Lowndes joined Triple Eight Race Engineering in 2005.

A powerhouse internationally, Triple Eight was a perfect match for Craig and he finished second in the championship that year. He narrowly missed out on the 2006 title, finishing second in a year which included his second Bathurst 1000 victory, and was third in 2007 after another Bathurst triumph.

2008 saw Craig enjoy another impressive campaign, finishing fourth in the championship and helping TeamVodafone to their inaugural team's title. He and team-mate Jamie Whincup also won an historic, third-consecutive Bathurst 1000. 2009 was yet another strong year for Craig, while TeamVodafone continued to dominate the series. Two event wins at Winton and Barbagallo helped Craig to another fourth place in the championship.

In 2010 Lowndes and TeamVodafone joined Holden another successful year eventuated with Craig and Mark Skaife pairing up to win the Phillip Island 500 and the Bathurst 1000. Another win at Symmons Plains helped Craig to fourth in the championship for the third year in succession.

Lowndes and Skaife finished 2nd place in the 2011 Bathurst race with Craig finishing only two seconds behind Tander the winner - the closest finish of any two cars in the history of the race.

Craig was then honoured in 2012 with the awarding of a ‘Medal of the Order of Australia’ (OAM) for services to his sport and the community, in the Queen’s Birthday Honours. The recognition was in part because of his charitable work with the RSPCA, Violence Against Women, and his continual work on road safety.

Craig finished second in both the 2012 and 2013 championships.  Craig had another great year in 2014, adding three more race victories on his way to fourth in the championship, and crossed the line as winner of Bathurst 2015.

In 2018 Craig announced his retirement from full-time racing, and finished the year with a win at Bathurst.